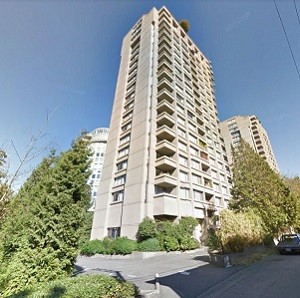 1005 Jervis Street is a 19-storey high-rise building purchased by Starlight Investments. The building is one of four Vancouver high-rises Starlight has purchased. (Google Street View image)

Financial terms were not disclosed in a release issued by Starlight.

“In the Canadian marketplace, an urban multi-residential real estate transaction of this magnitude and involving irreplaceable Vancouver real estate is rare.

“The acquisitions significantly increase our multi-residential portfolio in Vancouver and allow Starlight to recognize significant synergies created by the growing scale of our West Coast portfolio.”

Starlight also did not disclose the vendor, citing a confidentiality agreement, but all four buildings are listed as having been owned and managed by Vancouver-based Ottmann Properties on its website. They were the only four properties the firm owned in Vancouver, though the company says it also owns and manages apartment buildings in San Diego, Calif.

Ottmann’s head office is listed at 1501 Hero St., one of the four buildings involved in the sale.

Starlight said all four properties will now be managed by MetCap Living.

Nearby amenities include local restaurants and nightlife, retail shops, museums and theatres. The property is in close proximity to Stanley Park and English Bay Beach.

Paul Plaza is a 22-storey concrete high-rise containing 144 one- and two-bedroom units and offers residents on-site laundry, elevator access, surface and underground parking, storage lockers, a state-of-the-art fitness facility with a sauna as well as an outdoor pool.

Many units offer views of the mountains and the nearby Pacific Ocean.

Nearby amenities include retail and grocery shopping, theatres and restaurants with access to public transit and major highways. Located in Vancouver’s West End, Paul Plaza is in close proximity to the Vancouver Harbour, Stanley Park and Canada Place.

Located within downtown Vancouver’s West End and in walking distance to public transit, Peter Manor is in close proximity to Vancouver Harbour, Vancouver Aquarium, Stanley Park and the Naval Museum at HMCS Discovery. Nearby amenities include retail and grocery shopping, local restaurants, theatres and hotels.

Monika Vista is a 12-storey property of 39 one- and two-bedroom units with elevator access, secure underground parking, in-suite laundry and bicycle storage.

Starlight is a Toronto-based, privately held, full service, real estate investment and asset management company operated by a team of over 130 professionals.

Starlight’s portfolio consists of approximately 36,000 multi-residential units across Canada and the U.S. and more than 5.3 million square feet of commercial properties.