Toronto’s Bloor Islington Place has made an impressive turnaround since Starlight Investments acquired it four years ago as part of its “near-urban strategy.” 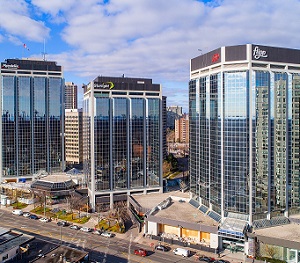 The Bloor Islington Place in Toronto is one example of the properties Starlight Investments has amassed as part of its “near-urban strategy”. (Image courtesy Starlight)

The three-tower, million-square-foot office and retail complex on Bloor Street West already had lots going for it. It has direct access to the Islington subway station and is adjacent to a MiWay transit hub. It’s in close proximity to the Queen Elizabeth Way (QEW) and Highway 401 and a 15-minute drive from downtown and Toronto Pearson International Airport.

Class-A Bloor Islington Place is more than 20 years old and is LEED Gold-certified. CBRE is the property manager.

* located on the outer fringes of a traditional urban node, but not deemed suburban;
* on, or easily accessible by, traditional urban transit systems;
* easily accessible by major highway networks;
* lower rental rates than most urban or suburban nodes;
* high-quality assets with comparable amenities to downtown locations;
* assets which haven’t seen the capital upgrades possessed by more traditionally located buildings;
* and appeal to both urban (transit-connected) and suburban (driving) employees.

A grocery store will open on the property this year.

On the management side, Starlight instituted an active leasing program, which began with tenant interviews conducted during the due diligence process. The program includes seeking out high-growth tenants and sectors, as well as strategic stack planning and relocation planning.

Put it all together, and you have a recipe for success.

Global snack food giant Mondelez International signed on and technology startup Flipp expanded from its initial requirement. Bloor Islington Place has seen its occupancy rise from 78 to 98 per cent, while rents have increased by 10 per cent.

Starlight, its affiliated True North Commercial REIT (TNC REIT) (TNT-UN-T) and joint venture partners have executed on a number of opportunities to acquire assets that fit the near-urban parameters at attractive capitalization rates.

* Toronto’s 3650 Victoria Park Avenue (owned by TNC REIT), which is in close proximity to Highways 401 and 404, not far from CF Fairview Mall and Steeles Technology Campus;

* Mississauga Executive Centre (owned by a private joint venture), on Robert Speck Parkway in Mississauga, which is beside Square One Shopping Centre and close to major highways, Toronto Pearson International Airport and future light rail transit;

* Southgate Executive Centre (owned by a private joint venture), at 2085 Hurontario St., is by the QEW, has signage easily viewable from the highway, and is also located conveniently to Toronto Pearson International Airport and future light rail transit;

* Ottawa’s 301-303 Moodie Drive (owned by TNC REIT), which has easy accessibility to Highway 417 for a 20-minute drive downtown, as well as proximity to the Kanata technology area, the new Department of National Defence campus and future light rail transit;

Thompson said these properties can’t properly be compared to Bloor Islington Place with regards to occupancy and rent increases because of market differences, but noted that all have been successfully repositioned. It appears there are more to come, too.

“Starlight is actively seeking to increase the size of its commercial portfolio in both on- and off-market opportunities for its various investment partners,” said Thompson. “Certain opportunities lend themselves to utilizing certain components of the near-urban strategy, depending on the partner, location, return profile and tenant mix.”