Still room and optimism for growth in suburbs

“The death of the suburbs is an untruth in the Canadian marketplace,” said Crombie REIT president and chief executive officer Don Clow early in a panel dubbed “The Facts and Fallacies About the Suburbs” at the Toronto Real Estate Forum at the Metro Toronto Convention Centre on Dec. 1. 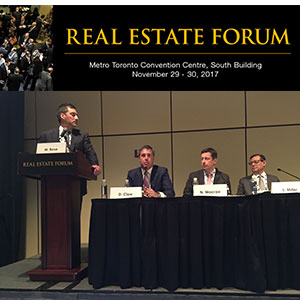 Session moderator Mark Rose, the chairman and chief executive officer of Avison Young, and four other panelists didn’t sum things up quite as succinctly as Clow. But they all shared his sentiment.

Clow said that Canadian suburbs are growing by 1.8 per cent annually, outpacing the 1.5 per cent growth rate of downtown areas.

Crown Realty Partners managing partner of real estate management Les Miller said downtown real estate gets a lot more media attention than that in the suburbs, but he pointed out that condominium construction permits and sales in York Region are almost on par with what’s happening directly south of it as part of the well-publicized Toronto condo boom.

“Not everyone wants the urban experience”

“Not everyone wants the urban experience,” said Richard Weir, executive vice-president of real estate and development for Vancouver-based and family-owned Bosa Development Corporation, which focuses on North America’s west coast and Calgary.

“The millennials are driving the urban renaissance but, as they become parents, there’s a migration back out to the suburbs. I think the challenge for the suburbs is traffic and commuting.”

Not everyone living in the suburbs is commuting downtown to work, however, as Healthcare of Ontario Pension Plan senior portfolio manager of real estate Nick Macrae said office tenant demands for more amenities and better transit are starting to be met in the suburbs. The fact that housing prices and office rents are lower in the suburbs is a major draw, he added.

Weir said that Bosa is offering mixed-use developments to attract technology companies to the suburbs.

Menkes Developments Ltd. senior vice-president of investments Joel Pearlman emphasized that there are a growing number of well-educated people living in the suburbs, where low-rise residences are selling well — at least in the Greater Toronto Area (GTA), where his privately owned company’s residential, industrial, retail and office properties are located.

“If you have a labour pool that’s there, you’re going to find ways of servicing retail, office and industrial,” Pearlman emphasized.

While the office absorption rate has grown in the suburbs over the last decade, according to Macrae, suburban land costs are increasing the cost of building there. He said that will likely cut down on construction and make it more difficult for supply to meet demand.

“As the demand absorbs the existing inventory, you’re not going to see the supply matching that and exceeding that like you did in the last decade.”

Rose said retailers are starting to use real estate differently than they used to because of the evolution of technology and e-commerce. While they may be cutting back on the size of some stores, they’re using more distribution and data centres. And large distribution centres have to be in the suburbs because they can’t fit in downtown cores.

Weir said that Bosa is dedicating an increasing amount of square footage in its multi-family projects to refrigerated storage because residents are buying more groceries online and having them delivered to their residences.

Clow acknowledged that e-retailing is forcing companies “to change from an institutional mindset to an entrepreneurial mindset” and adapt to changes more quickly. While it’s changing the way retailers do things, he said that it’s not yet driving the business and that Crombie continues to focus on “great dirt and great people who know how to stay with it or stay ahead of it.”

New Glasgow, N.S.-based Crombie is 41.5-per cent owned by Empire Company Limited, which also owns the Sobeys grocery store chain. Clow said his REIT is able to tap into the intelligence of Sobeys when deciding on what properties to acquire, develop or dispose of, and that has resulted in a “very nice” risk-adjusted return in suburban locations.

“Land costs in the GTA and Vancouver are ridiculous and, even with that advantage, it’s still very difficult to make the returns work. In the suburbs, if you have that knowledge, you can easily make them work. We think we’re in a good position going forward to build our portfolio significantly on the back of that intelligence from the retailer.”