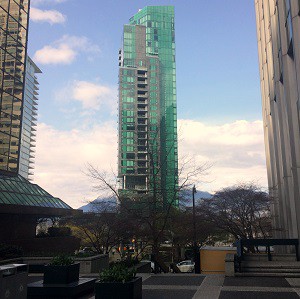 “Vancouver is just a beautiful place,” and that is just one factor in high housing prices, a panel on Asian Influence in the city’s real estate market heard during the Vancouver Real Estate Forum. (Don Wilcox RENX.ca)

Day was speaking at the Vancouver Real Estate Forum April 11 on a panel focused on the role of foreign investment in B.C. He said the provincial government’s 15 per cent tax on foreign buyers of property in Metro Vancouver and the City of Vancouver’s policy to apply a one per cent tax on unoccupied homes will chase away investment, tax revenue and money for social programs.

Day, who is vice-chairman of the Canada China Business Council, said the media is partly to blame for the implementation of the taxes because reporters continue to cover what he characterized as myths about the market.

One myth is people can’t afford to work and live in Vancouver, he said, explaining through lengthy anecdotes that he lives and works in downtown Vancouver.

“Those sidewalks are pretty busy with people who are working,” he said.

Day said he recently saw a property listing for a two-bedroom townhouse for sale in Abbotsford in the “high-$200,000s.” He said houses in the Langley and Mission areas are also relatively inexpensive.

“This is not an unaffordable area in which to live,” he said, referring to the Fraser Valley.

“It is pressure from media that makes it appear that governments are somehow hard-hearted (and) starving people out of Vancouver, and young people can’t live here,” he said. “The more response you get and the more pressure you get, then government has to come up with responses.”

He said Vancouver is a popular city and its high housing costs are a “fact of life.”

Day’s comments came a day after Metro Vancouver’s 24-hour homeless count snapshot showed there were 3,605 people in the region without homes — a 30% increase over 2014.

“That means vacancy police,” he said. “You’re going to have people roaming the hallways and the corridors and the back alleys saying, ‘Who’s not home?’ What? Knocking on your neighbours’ doors?”

Alan Lee, the CIO of Atelier Capital Partners, and Jack Yong, a partner with Lawson Lundell LLP, joined Day as speakers on the panel.

Sources of Chinese money have evolved

Yong said money continues to come in from China, though the sources have evolved.

“It started with a lot of state-owned enterprises looking for investments in natural resources like mining and energy,” he said. “That’s become mostly private enterprises, and a lot of that is going into real estate, although the industries that are being sought after are a lot more diverse now.”

Yong downplayed the effects of new capital outflow controls in China. He said the new controls are delaying and sidelining only a minimal number of deals in B.C.

“There is already so much capital that has already left China,” he said.

He said policies like the foreign buyers tax need to be more carefully considered by the B.C. government. In January, the provincial government announced an adjustment to the tax to exempt foreigners with work permits.

“We attract foreign investment in large part because we have a good reputation around the world for being a safe, law-abiding, stable place to invest,” Yong said.

Lee, with Atelier, said the motivation for many investors to come to Vancouver is simple and the demand from Mainland China will continue. “Vancouver is just a beautiful place,” he said.

Vancouver’s housing troubles, similar to those in many other global cities, are born out of macro-economic trends and supply problems, Lee said. Densifying urban and suburban development and changing perspectives on home ownership must be part of the solution, he said.

Lee took the middle ground when asked about the foreign buyers tax.

“Every country, every city, has this affordability issues and politicians have to do something to address it for their constituency,” he said.