The Eastern Ontario town of Gananoque offers prime waterfront views, and the suites at The CaraCo Group of Companies’ Stone & South condominium project will offer some of the best. 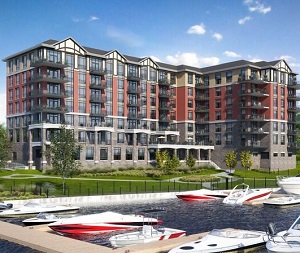 The original plans for Stone & South featured 89 units in two six-storey, concrete buildings. But the Kingston, Ont.-based company realized a change was required when none of the units without water views were sold — despite a lower price.

“We eliminated all of the city view units and created a new front façade,” said CaraCo chief executive officer Gennaro DiSanto. “Now when you go into your unit you’ll have a straight view of the water, and behind you is a city view with no other units blocking your view.”

Those who had already committed to purchasing prior to the redesign were offered the newer and larger suites at the same price, and sales have since picked up. Eighteen of the 41 units in the first building had been sold as of June 13, while sales for the 29-unit second building should begin this summer.

DiSanto said a buyer even scooped up the suite he was planning to buy before he pulled the trigger.

Work on the waterfront property’s seawall and soil removal will begin this summer, with plans to get into the ground in September or October, when sales are expected to have reached 75 per cent for the first phase. First occupancy of the initial building is expected in early 2020, with full completion scheduled for that summer.

“The development can be phased from a construction point of view,” said DiSanto. “The expectation would be that, as we move forward into September and October, sales in phase two will be sufficient enough for us not to phase it.

“We’ll likely build it all at once. The efficiencies that we gain in that relate to the underground parking. They’re separate structures but they do connect. Being able to do all of your underground podium at once is more efficient.”

Stone & South has a prime waterfront site between the popular Thousand Islands Playhouse and historic Gananoque Inn & Spa. CaraCo purchased the property for $4 million and tore down the existing marina to make room for Stone & South, which is named after two streets which intersect at the property.

The open-concept suites are offered in two-bedroom, two-bedroom-plus-flex and three-bedroom-plus-flex models with up to 1,547 square feet of interior space. Prices range from $488,900 to $849.900, including parking, in the Chamberlain Architect Services-designed development.

Finishes in the common areas and suites will be upscale and include six appliances, wide plank-engineered hardwood, granite countertops and Shaker cabinets. The selection process for interior decors will begin this summer and upgrades and customization are encouraged. All of the suites have floor-to-ceiling and oversized windows as well as eight-foot-deep balconies.

Amenities include: The Upper Deck party room on the main level, which includes a kitchen, dining area, billiards and televisions in its indoor and outdoor spaces; a fitness centre; pay-per-use executive concierge services; a lobby with a fireplace; storage lockers; private gated and landscaped outdoor barbecue areas; an off-leash dog park; storage for kayaks and canoes; swimming and fishing docks; and visitor parking.

Stone & South residents can also purchase boat slips, ranging from 30 to 40 feet in length and in price from $35,000 to $45,000, for their exclusive use. About half of the buyers so far are looking at slips, and DiSanto thinks that number will increase as construction draws closer.

“We are approved for more boat slips than suites, but the reality is that we’ll likely build somewhere around 40 or 45 boat slips, depending on where the market is.”

Milborne Group, which has marketed and sold more than $25 billion worth of condos during the past 40 years, is the exclusive listing agent for Stone & South. Kingston-based regional director of marketing and business development Mariah Hamilton said some local purchasers plan to live there year-round. Others, primarily from the Greater Toronto Area and some from around Ottawa, already have properties in more southern locations for the winter and are looking at Gananoque as a pleasant base for warmer months.

Locals, especially older people who fit Stone & South’s demographic, aren’t accustomed to purchasing condos. Part of the sales pitch has involved explaining the process to them.

“I’m totally convinced that if the building were up, it would be sold-out,” said DiSanto. “We’d like to hold back some units until construction is completed, because that’s where you get a better bang for your buck.”