The acquisition of 44 former OneREIT properties by Strathallen Capital Corp. has moved the company into the big league among Canadian property owners and managers. 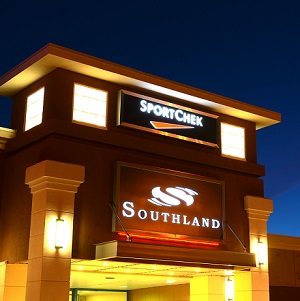 Southland Mall in Regina is one of 44 former OneREIT properties purchased by Strathallen. (Image courtesy Strathallen)

“Management saw it as the chance to acquire critical mass in the highly competitive Canadian market, and apply the financial strength of our investors in hand with the experience and technical ability of the Strathallen platform,” Spence said.

“The assets of the portfolio fall within Strathallen’s value-add mandate, operating experience and trade mentality.”

“We feel that the properties will greatly benefit from our in-house property and asset management, with a concentration on accretive capital projects,” said Spence. “Strathallen Property Management has expanded to 20 site offices across the country to adequately manage the additional properties.”

Spence added Strathallen is “growing in all aspects, from accounting to asset management, to accommodate the substantial growth of the company.

“At head office, we have expanded our physical space to satisfy the requirements of our new hires. A carefully devised integration plan is being executed upon daily.”

Strathallen was founded in 2003 and has approximately 8.9 million square feet of retail real estate assets under management valued at around $1.7 billion.

The 44 former OneREIT properties were purchased through money from Strathallen Retail Property Fund IV and an unnamed institutional investor. Spence said initial discussions with OneREIT took place in the summer of 2015, but the deal really started gaining traction in January. It was announced in August.

“Being a relationship-oriented company, this OneREIT transaction will act to deepen our existing relationships with tenants and lending partners,” said Spence. “It puts us in a broader playing field, further facilitating large public market transactions.”

The new portfolio comprises approximately 4.6 million square feet of space across eight provinces and one territory, with a 36 per cent concentration in Ontario. The property types vary and, while many are located in secondary or tertiary markets, Spence said the majority are the dominant retail centres in their respective trade areas.

Eighty-three per cent of the portfolio’s occupied gross leasable area is represented by national brands. Walmart is the most represented covenant, representing 22 per cent. There’s minimal exposure to retailers that provide discretionary or luxury items such as fashion and electronics, while it’s heavy on e-commerce-resistant tenancies such as grocery, pharmacy and services.

A number of the newly acquired properties fit the Strathallen Retail Property Fund IV value-add mandate and will require some sort of major renovation or redevelopment. Strathallen typically reserves 15 to 20 per cent of equity for capital improvements and value-add initiatives.

Approximately $75 million will be spent on such repairs across the new portfolio to remedy deferred maintenance and create additional value.

“A unique business plan has been created for each property that is subject to revisions over time,” said Spence. “Potential redevelopment scenarios are to be further investigated and initial strategies are to be revisited as operations commence and we gain a better understanding of each property.”

Value is expected to be further added through a renewed focus on leasing, incentivizing tenants, debt refinancing, creating additional density through capital projects, gaining operating efficiencies with scale, and repurposing or changing the overall concepts of the properties as necessary, according to Spence.

“The mandates of Strathallen’s pooled funds are to create value and sell the properties within five to seven years,” said Spence. “The majority of the newly acquired properties will be held for this duration, as it will take time to fully execute on their business plans.

“Relatively speaking, this is not a long-term hold as we’re not focused on monthly income distributions, as is a REIT, but rather have adopted a trading mentality to dispose of assets at their peak value. It’s likely that we will need to adapt as the properties are managed.

“Some of the assets are prime for immediate disposition due to their present strength and stability of income. This will allow us to generate additional capital needed to create value across the portfolio. It goes without saying that property sales will be completed when market conditions warrant.”

Strathallen is looking to create additional investment vehicles. Spence said it’s considering a number of areas — including core, long-term hold properties — and other asset classes such as industrial. Company executives are also discussing the creation of open-ended funds, a private real estate investment trust and expansion into the United States.

Spence said Strathallen has always been able to organize the required funding to take on exceptional investment opportunities, and it’s still on the lookout for them.

“Strathallen is committed to adapting to the changing retail landscape and consumer behaviours,” said Spence. “Specific programs are underway to accommodate and encourage adapting retailers by providing them with the real estate they need to thrive.”