Six years after embarking on their first partnership to redevelop a historic Toronto hotel, devel... 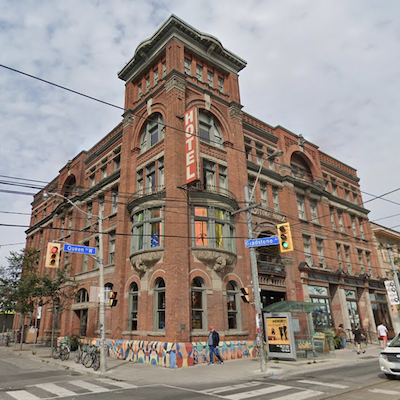 Six years after embarking on their first partnership to redevelop a historic Toronto hotel, developers Streetcar Developments and Dream Unlimited (DRM-T) are about to do it again. The partners announced Wednesday they will purchase the Gladstone Hotel in Toronto’s West Queen West neighbourhood.

Constructed in 1889, the Gladstone is the oldest continually operating hotel in the city. It is located at 1214 Queen St. W., at the corner of Gladstone Avenue.

“We have great respect for the West Queen West community and believe the Gladstone Hotel is a unique representation of the neighbourhood’s art, culture and diversity,” said Les Mallins, founder and president of Streetcar Developments, in a release.

“We look forward to amplifying the hotel’s offerings with our refreshed vision, enhancing the current building while ensuring the property remains a staple within the community.”

The Gladstone is a boutique-style hotel featuring 37 unique, artist-designed rooms. It is a major player in the city’s arts and culture, hosting dozens of exhibitions and other events each year.

The transaction is expected to close later this month. The buyers have not revealed any future plans for the property.

In 2014, Streetcar and Dream teamed up to purchase and then transform The Broadview Hotel, a 127-year-old landmark along Queen Street East, into a luxury boutique hotel.

By now acquiring the Gladstone Hotel, the partnership has ownership of two historic properties book-ending the city’s Eastern and Western downtown areas.

“We are excited to add the Gladstone Hotel to our portfolio of character buildings of historical significance, which includes the Bay Street Collection, Distillery District, and the Broadview Hotel,” said Michael Cooper, chief responsible officer of Dream Unlimited, in the release.

“We believe in building inclusive communities and designing exceptional places to create, inspire, and bring the community together.”

Crescent Hotels and Resorts will oversee both properties as the hotel management company.

Gladstone Hotel and the Zeidler family

The Gladstone is currently owned by the Zeidler family. It underwent a major renovation in 2005 led by architect Eb Zeidler, to preserve the landmark building’s historical significance.

“The decision to sell the hotel is a personal one,” said Christina Zeidler, the current hotel president. “I looked for someone with the vision to carry on the legacy of the Gladstone Hotel.

“It took a long time to build the culture around the Gladstone. The commitment to continue to grow this vision is a dream come true.

“Really it is the best possible scenario, not just for the building but for the staff and patrons who love this property and the culture around it. I have personally known the Streetcar team for years, as neighbours to the Gladstone, but also, significantly, as city builders.”

One major difference between the Gladstone and Broadview acquisitions is the current use. When bought by Streetcar and Dream, the Broadview was used as a rooming house and had a street-level strip club.

It is now a 58-room boutique hotel with event spaces, several dining options and a rooftop patio.

In addition to the Broadview project, both Streetcar and Dream have histories of support for the city’s historic buildings, art and culture. In 2012, Streetcar Crowsnest opened its doors and has since become an arts and culture hub in the city’s East End.

Dream’s Distillery District is one of Canada’s premier arts, culture, and entertainment destinations, and hosts its largest collection of Victorian architecture.

Streetcar is a well-known Toronto developer of mid-rise condo buildings located in culturally rich, livable downtown neighbourhoods. Its core philosophy – Rethink Urban Living – reflects the belief that projects must integrate seamlessly with their neighbourhoods and enhance the lives of the entire community.

Dream is one of Canada’s leading real estate companies with approximately $9 billion of assets under management.