1M square feet of office absorption in Montreal … during Q3

Montreal office leasing activity is so strong it could experience its largest absorption in the p... 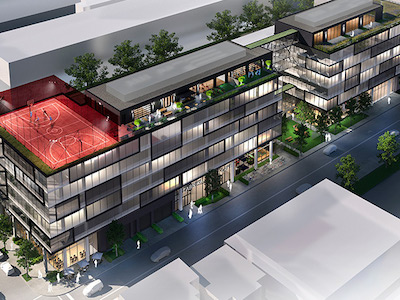 7240 Waverly is a six-storey, 118,259-square-foot Montreal office building being constructed as a co-working space for Fabrik8. (Courtesy JLL)

Montreal office leasing activity is so strong it could experience its largest absorption in the past two decades during 2019, according to JLL’s Q3 2019 Office Insight report for the city.

The Greater Montreal Area recorded 1,002,959 square feet of net absorption in Q3, the second-largest quarterly gain since 2002. It was also four times larger than Montreal’s 10-year average of 226,822 square feet. While all submarkets saw an increase in occupied area, the majority of the leasing took place downtown, with 721,219 square feet.

“In the last 12 months, technology companies have combined for the largest part of the absorption,” JLL executive vice-president Andrew Bissett told RENX.

Financial services was the next-largest employment sector to absorb space, followed by public institutions and government.

An educated labour force, a good quality of life, a strong economy, an entrepreneurial spirit and affordable housing and operating costs are major contributors to Montreal’s booming office market, according to Bissett.

“From a business perspective, the Quebec government has done a very good job of creating subsidies for technology companies. That created momentum years ago and has combined with very strong economic development offices in Montreal and Quebec. Montreal International is very effective in attracting foreign investment into the city.”

Montreal’s overall vacancy rate has decreased for six consecutive quarters. The downtown rate dropped 90 basis points to 8.3 per cent in the quarter, a 240 basis point decrease year-over-year. Bissett anticipates the vacancy rate for downtown class-A office buildings to fall to around two per cent during the next 18 to 24 months.

Rents for class-A downtown space have risen by about 25 per cent over the past two years.

“They’ll probably stabilize in the next quarter or two and, if demand remains as strong as it’s forecasted to, we will see rates increase again by the end of 2020,” said Bissett.

The “creative” industry led leasing activity, making up one-third of transactions over 20,000 square feet. The majority of this took place in Old Montreal, Mile-Ex and the Plateau, as companies appreciate the brick-and-beam loft-style buildings in those regions.

“Those properties, in close proximity to public transit, have been very much in demand,” said Bissett. “Typically they’ve been offered at a lower cost, but larger institutional owners have expressed interest and the property values have increased.

“They’re not as affordable as they used to be, but they’re still in demand.”

WeWork leased another 20,000 square feet at Ivanhoé Cambridge’s 81,741-square-foot 455 Saint-Antoine Ouest. In the last 12 months, WeWork has leased more than 200,000 square feet, which accounts for 18.6 per cent of downtown Montreal’s net absorption.

“SoftBank just took over WeWork and injected several billion dollars into the company, so there won’t be an exit from Montreal. There’s still very strong demand. There might be a change in the landscape with more operators, but the industry as a whole remains stable and strong.”

There’s 1.5 million square feet of office space under construction in downtown Montreal and another million in the midtown area. With 70.2 per cent of that already pre-leased, less than 500,000 square feet of vacant new space will be added to the market in 2020.

Among the buildings being developed are:

* a mixed-use development by Broccolini in Old Montreal that will encompass 320,000 square feet over 10 floors. No tenants have yet been announced for the building, which is expected to be delivered in the summer of 2022;

* Maison de Radio-Canada, another Broccolini development at 1500-1700 René Lévesque Blvd. E., will be delivered in 2020. Radio-Canada will be the major tenant of the fully leased, 418,000-square foot building;

* Gare Viger, at 530 Saint Hubert St., will be completed in 2020. The eight-storey, 147,000-square-foot, multitenant building is being developed by Jesta Group;

* 7240 Waverly is a six-storey, 118,259-square-foot building to be delivered next year as a purpose-built co-working space for Fabrik8;

* and 6795 Marconi, a four-storey, 105,000-square-foot project by Canderel. Microsoft is a major tenant, but space is still available.

Allied Properties REIT closed its $322.5-million acquisition of 700 De La Gauchetiere West from Dream Office REIT during the third quarter. It was built in 1983 and includes 895,354 square feet of office space, 40,512 square feet of retail space and 693 parking spaces.

A podium with a retail shopping concourse connects 700 and 600 De La Gauchetiere West.

The adjoining 600 De La Gauchetiere West was purchased by Kevric Real Estate Corporation and an undisclosed Canadian institutional partner for $167 million, according to Bissett.

The 28-storey, 710,000-square-foot building was completed in 1983 and currently houses the headquarters of National Bank. The bank will move to a 40-storey, million-square-foot building being constructed on St-Jacques Street in 2023, opening up new space in the existing HQ.