The suburban Calgary office environment continues to face stiff vacancy challenges after the recession years of 2015-’16, but entrepreneurs are finding niches to bring new product to market. 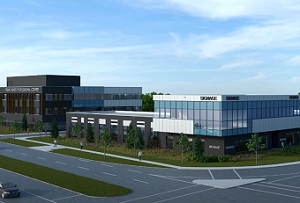 The first phase of the Royal Vista Professional Centre II in Calgary is now under construction. (Image courtesy Barclay Street)

“There’s been a lot of reshuffling in the market and that continues to be the trend,” said Chris Rundle, a leasing associate with Barclay Street Real Estate in the city. “We do see the northwest and projects like (Royal Vista Professional Centre II) in demand.”

The Royal Vista centre, being developed by the Prime Real Estate Group and marketed by Barclay Street, consists of two phases. The first, called Building B, is currently under construction and offers 5,500 square feet of office space on the second floor. It will be available to tenants this summer.

Retail space at street level of up to 2,800 square feet is being marketed by the Taurus Property Group.

Building A, which will be situated next door on the site at 4 Royal Vista Way N.W., will comprise three floors of almost 48,000 square feet, or just under 16,000 square feet per floor. Construction of that space will be triggered by leasing activity.

Potential tenants for both buildings

“From the time we strike a deal in Building A, we believe we can have occupancies within 18 months. We’re marketing that and we’ll move very quickly upon lease execution. What’s wonderful about this building, which is different from other nodes in the city, is that it’s got a smaller floor plate.

“We can accommodate tenants of a smaller size compared to, say, other areas of the city where some of these buildings have got 50,000-square-foot floor plates that make it a little bit more challenging. We look at that as being a significant benefit.”

Due to a reassessment of inventory and tracking methods, Scott said those figures can’t be compared to previous vacancy rates. However, he said the suburban markets appear to have stabilized.

“From our perspective, the suburban markets appear to have calmed down substantially, as seen over the previous few quarters when vacancy changes were muted. We have every reason to believe this quarter is no different,” said Scott.

The overall suburban vacancy rate for Q1 2017 was 22.9 per cent and at year-end it was back at the same level, having risen slightly during the intervening quarters.

Other than Royal Vista, there are two other suburban office construction projects ongoing in Calgary, according to Scott.

The Macleod Professional Centre is just over 31,000 square feet and should be available by June. The medical-focused facility, at Macleod Trail and 39th Avenue, is being leased by the Opus Corporation.

The 160,000-square-foot Hexagon Calgary Campus, which is being purpose-built for its occupier, is expected to be completed in early 2019.

The Royal Vista Professional Centre II is located within the Royal Vista Business Park in the northwest community of Royal Oak, one of the city’s most populous and quickly developing communities.

“There’s kind of a lack of professional services in the northwest and we feel that a development like this is well-located to help meet the need of a growing demand in what is an under-serviced market,” said Rundle. “We are seeing increased activity going into Q2 (in the suburban office market).

“But it’s still a bit of a reshuffling of tenants. That’s why the quality continues to be the trend where tenants are looking for improved quality of office space ideally for better value.”

Barclay Street says the Royal Vista Business Park has direct connections to many of Calgary’s most important transportation arteries. It’s minutes away from the Calgary International Airport, Foothills Hospital, and the University of Calgary.

The business park is also close to many retail amenities. It’s located next door to Royal Oak Shopping Centre and within 10 minutes of three regional shopping centres.

Prime’s projects owned and under construction have a current retail value of more than $250 million. Its primary projects are located in Western Canada and the Greater Houston Area.