Ground has broken on an office tower that will be the first building constructed for one of downtown Toronto’s most eagerly anticipated mixed-use developments, Sugar Wharf. 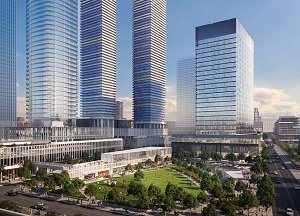 “When you have a site of this size, you’re able to do a lot more than just a one-off building,” said Peter Menkes, the commercial/industrial division president of Menkes Developments Ltd., which is partnering on Sugar Wharf with Greystone Managed Investments Inc. and Triovest Realty Advisors Inc.

“We’re challenging our team to bring in great amenities for the neighbourhood and community.”

The 11.5-acre property at 100 Queens Quay E. was purchased from the Liquor Control Board of Ontario (LCBO) for $260 million in 2016. The LCBO currently occupies a retail store, a four-storey office building and a 376,000-square-foot warehouse on the waterfront site, a 10-minute walk from the financial district and Union Station.

Office building will be first at Sugar Wharf

The new B+H Architects-designed office building will feature 25 storeys with approximately 690,000 square feet of class-AAA space. It will incorporate environmental and sustainability elements in its design, construction and operation and is aiming for a LEED Platinum certification.

The LCBO will occupy about one-third of the office space and the ground floor will feature a 25,000-square-foot flagship LCBO retail store. It will replace the current Queens Quay LCBO outlet, which will be torn down and become part of a 2.2-acre park serving a new elementary school and the larger downtown core population.

The park will be subject to a design competition.

Sugar Wharf will also include five condominium towers, varying in height from 64 to 90 storeys, and a mid-rise purpose-built rental building. It’s anticipated that the first condo phase will come on the market later this year, and Menkes is looking to attract a range of ages and family sizes. Floor plan layouts are currently being designed and units will vary in size from one to three bedrooms.

“The rental market in the city has been strong,” said Menkes. “It’s hard to find a place to live in the city whether you’re a buyer or a renter. We felt that the economics behind it made sense.”

There will also be about 300,000 square feet of multi-level retail space, including the LCBO and a grocery store. Aside from the LCBO, no office or retail tenants have been announced.

The existing LCBO head office will be retained and include residential amenities. Part of the exterior walls of the warehouse will be maintained and will form part of a heritage mews between the office building and residential towers.

“When there are nice attributes to a building, you want to be respectful of them and incorporate them,” said Menkes.

Menkes said Sugar Wharf is a seven-year project that will house between 7,000 and 8,000 people and employ 4,000 to 4,500 upon completion. Redpath Sugar Refinery and Sugar Beach are located in the vicinity, so the partners decided to go with a similarly themed name for the master-planned community, according to Menkes.

All of the buildings at Sugar Wharf will be connected to Toronto’s weather-protected indoor PATH pedestrian system when the network is expanded east of Yonge Street in the future. Menkes also expects a light rail transit line on Queens Quay to serve the community in the future.

Menkes Developments was founded in Toronto in 1954, and the Greater Toronto Area has remained its primary focus. The fully integrated, private real estate company is involved in the construction, ownership and management of office, industrial, retail and residential properties.

Its past projects include: the Empress Walk entertainment, shopping and residential complex in North York City Centre; the Four Seasons Hotel and Residences in Bloor-Yorkville; and the 25 York office tower and the two-million-square-foot Harbour Plaza Residences/One York commercial retail complex in Toronto’s South Core district.

Regina-headquartered Greystone is a privately owned, Canadian institutional investment manager which was founded in 1988 and had $33.6 billion of assets under management at the end of 2017.

Triovest offers capital and real estate advisory services. It has more than $8 billion in assets under management and $4 billion in development.

“When we were looking at the land, we were looking at different financial partners that we wanted to work with,” said Menkes. “Greystone was interested and they were working with Triovest as their adviser, so that’s how it came together.”