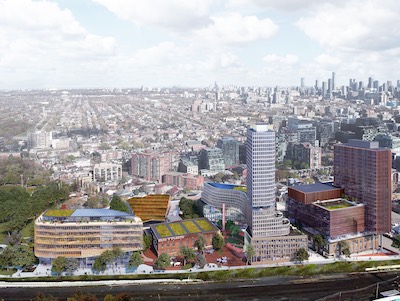 A rendering for 2 Tecumseth, which will be developed jointly by TAS and Woodbourne. (Courtesy TAS)

TAS has sold a 75 per cent interest in its five-building, 825,000-square-foot 2 Tecumseth development in Toronto to Woodbourne Capital Mgmt. TAS and Woodbourne will co-develop the high-profile site near King and Bathurst Streets in the arts and entertainment corridor.

“We are thrilled to partner with Woodbourne, an established leader in the Canadian multifamily residential space, to transform of one of the last major revitalization opportunities in the downtown core,” said Mazyar Mortazavi, president and chief executive officer of TAS, in the announcement. “2 Tecumseth will be an incredible new community that seeks to embrace the complexities that make neighbourhoods great.”

Financial details have not been released.

In an interview with RENX, TAS chief operating officer Neil Vohrah said TAS develops some projects on its own, but had a couple of reasons for seeking a partner with 2 Tecumseth.

“With a project this size because of – not necessarily the level of complexity – but just because of the sheer scale of the project, we intended to bring in a development partner to share in the experience. Also, more importantly, because you bring different approaches and different opinions on how we can do the site,” Vohrah said.

“We wanted to bring in a partner who has a lot of experience on the rental side of things and Woodbourne has done and completed successfully many of these type of projects and partnered with many other developers.

“When we launched a search for a partner in October 2020 we were really interested in speaking with them.”

Woodbourne is also a partner on an even larger development, as part of the team working on the rental residential portion of The Well, a 3.1-million-square-foot, multi-tower downtown Toronto development. With its partner RioCan REIT, it will deliver over 900 units in three of the towers.

Woodbourne and RioCan are also partners in several other rental developments.

2 Tecumseth will be the first time TAS and Woodbourne have worked together. They will be partners on the entire project, not just the residential portion.

“We’re developing it together,” Vohrah said. “TAS has a lot of expertise in the master planning, and on the impact side of things and that is where we’ll be taking the lead in the development of the project.”

The development received zoning approval in 2020. TAS recently submitted the site plan for approval and the partners are working to receive the necessary permits to demolish some of the existing buildings on the site of the former Toronto Abattoirs. Some of the buildings will be renovated as part of the project and the smokestack will be retained.

“The current site is occupied by the abattoir. The abattoir will come down, I would say, over the next year. We have to go through the process to get the relevant permits to get that down,” Vohrah said.

“We are undertaking the design development phase right now. We hope to start construction toward the end of next year or early 2023. We intend to launch the sale of the condominiums in Q3 or Q4 2022.”

It will be developed in conjunction with the neighbouring Wellington Destructor project, for which TAS won the right to be the long-term head lessee following a competitive process. TAS is also working on its plans for the former waste incinerator site, with an eye to providing more information in 2022.

“Together with the five-acre Tecumseth site, we’ll have a much larger precinct where we intend to create a destination . . . what we are trying to do here is have a campus feel to it,” Vohrah explained.

“There is also going to be a mixed-use pedestrian park at the southern boundary of the site, connecting it to the Bentway and the rest of the green space. We’ll also have a lot of publicly accessible private landscaping.”

Phase one at 2 Tecumseth

The first phase will focus on two residential towers which will contain about 920 residential units – a mix of condos and rental apartments – as well as retail and commercial space. Plans also call for about 400 parking spaces in underground garages.

“Project 1 . . . consists of two buildings, both are new construction. One is a 24-storey residential tower which is primarily going to be a rental tower. Another one is a 31-storey building which will be primarily condominium, but also have some rental components,” Vohrah said.

Both will feature podiums: “The podiums will be a mixed-use development with commercial and retail.”

Accommodation for cultural programming is also being incorporated “so we can deliver our impact objectives and activate the space. We are not trying to create a dead campus, we are trying to bring some life to it so it is more of a destination rather than a place where people just pass by.”

A future phase is to include a mid-rise office building and two more smaller buildings on the site.

Another sustainable aspect to the project will be a geothermal district heating system.

Vohrah said along with the final design details, the partners are completing the budgeting process, so he could not provide an estimated value for the development.

“Both TAS and Woodbourne are committed to created a great community-focused precinct for the community. We both have very strong objectives, not just on creating housing, but on the focus for impact both on the sustainability front and the social front.”

ABOUT TAS and Woodbourne

TAS is a Certified B Corporation and Future-Fit Pioneer with a focus on impact investing. It has an active pipeline and portfolio totalling six million square feet across 17 properties throughout the Greater Toronto and Hamilton Area.

TAS focuses on tackling climate change, expanding affordability and equity, and building social capital to create neighbourhoods – and ultimately cities – where people can thrive and belong.

Woodbourne invests on behalf of a broad base of institutional investors across the globe, including public and private pension funds, endowments, foundations and funds.