Technology infrastructure has become a critical part of commercial real estate, and representatives involved in the sector discussed it with two members of WiredScore at its recent Canadian launch event  at Toronto’s The Globe and Mail Centre. 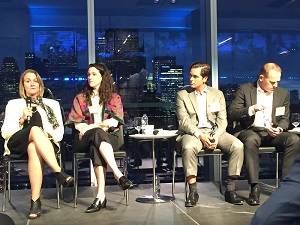 “Every business today has to operate utilizing the Internet. It’s the oxygen that lets us all be successful and lets us all breathe.

“People will have different bandwidth needs but everyone, in order to be successful and productive, has to do so in a building where ownership has invested in that success.”

“The office occupiers of today are no longer a homogeneous bunch of tenants,” said Toronto-Dominion Centre general manager David Hoffman. “Organizations today are looking for new ways to add value, new ways to innovate, new ways to retain their top talent, new ways to save money and new ways to embrace change.”

Hoffman emphasized location decisions are now less based on price as tenants are looking for building owners and managers who embrace their business, respond to their needs and show they’re environmental leaders.

Cadillac Fairview has established a dedicated team that looks at smart and connected buildings and has introduced such technologies as computerized maintenance management systems, real-time utility metering, call centre technology and electric vehicle charging stations to reduce infrastructure downtime while improving decision-making and the customer experience.

Some of the company’s 13,000 employees have worked at folding tables and chairs; things were moving so fast there wasn’t time to get proper furniture, but they were good to go as long as they had a strong Internet connection.

“Landlords are evolving from traditional rent collectors to service providers,” said Hoffman. “The physical buildings themselves are becoming services and amenities that enable user experience and enable our tenants and staff to be more productive, healthier and more sustainable.”

Ivanhoe Cambridge senior director of office leasing Charlie Musgrave discussed CIBC Square, which it’s co-developing with Hines and was (along with the aforementioned TD Centre) one of the first seven buildings in Canada to achieve Wired Certification from WiredScore, which recognizes their ability to provide best-in-class connectivity infrastructure.

Erixon added solar see-through glass windows are close to commercial deployment, which would enable buildings to become power plants to support tenant activities in the next five to 10 years.

“I think the most exciting developments are in virtual reality and augmented reality,” said Erixon. “That can turbocharge the entire food chain for real estate.”

Such technology will make it easer to visualize space, conduct value-engineering research with contractors, market to out-of-market tenants, and provide prospective tenants with a virtual walk-through to see what a space will look like and how it can be used.

Erixon said the cost of such technology is dropping rapidly.

WiredScore president William Newton, who moderated the discussion, credited Toronto for its success at “marketing itself as an attractive place for businesses from around the world to come to.”

Hoffman attributed the low downtown Toronto vacancy rate to strong financial and professional sectors, a strong Canadian macro-economic environment and a shift to the core from the suburbs by many companies seeking live, work and play amenities and transit to attract and retain top talent.

“We’re generally in a very healthy, balanced and robust commercial office market. That’s forcing all landlords, including Cadillac Fairview, to be more competitive and offer more amenities and be innovative.”

Erixon said Toronto has everything Amazon is looking for in a location for its second headquarters. Newton said Boston, Atlanta, Austin, Toronto and Pittsburgh are the five favourites to land Amazon, according to a British betting firm.

While not as large as Amazon, Musgrave noted Thomson Reuters has chosen to set up a technology hub in Toronto that will add 1,200 new jobs to the city because of its multicultural, multilingual, young and highly educated population and condominium developments in close proximity to downtown.