The TELUS Sky tower in downtown Calgary is the last skyscraper under construction during the city’s most recent building cycle, but it faces a tough challenge to lease office space in an economy that is recovering slowly. 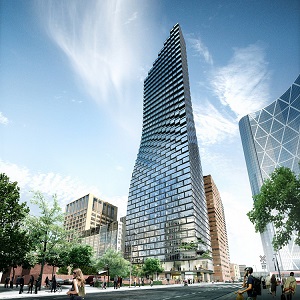 The 60-storey, 750,000-square-foot project is unique in Calgary. It will have a retail floor, topped by 29 floors of office space and then a further 30 floors of residential rental units in the heart of the city at 7th Avenue S.W. and Centre Street.

The building is expected to be completed by early December 2018.

For the office component, TELUS is the only company so far that has committed to space.

“Our opinion on Calgary hasn’t changed,” Mabberley said. “We started developing TELUS Sky on the eve of the downturn. The writing was on the wall when we started excavation and if we had been concerned about the long-term strength of Calgary and the market, we wouldn’t have dug a 90-foot hole.

“But the reality is Calgary does go through cycles. We’re confident that Calgary will evolve and find new markets to stabilize its economy.

“We developed TELUS Sky to be there for the long-term. So while obviously we’re concerned about the vacancy rates for the immediate future, we’re also very confident that over the long-term TELUS Sky will remain a very viable product on the market.”

The record-level Calgary downtown office vacancy rate is creeping towards the 30 per cent mark. Since 2012, eight office buildings in the city have been completed totalling just under 6.2 million square feet. Total inventory is now 43.6 million square feet, according to Barclay Street Real Estate Ltd.

“It’s going to be a very challenging environment for them  finding new tenants,” says Todd Throndson, managing director of the Avison Young office in Calgary. “The advantage the building has is it’s a mixed-use development versus a traditional office building and because of that it’s going to speak to a different mindset with regards to what kind of office space works for a tenant.

“Another big challenge is that the large size tenancy is predominantly not in the market. Most of the deals happening in the marketplace are happening under 10,000 square feet with a vast majority of those under 5,000 square feet. The market’s being dictated today by a type of tenant that’s really not going to have any impact on their dollar.”

However, Throndson says the project has time on its side. Some potential tenants might not want to do something in today’s market, but would perhaps be more willing to look at the future when the building is completed.

Barclay Street says the overall office vacancy rate for the downtown in the third quarter was up 0.4 per cent to 25 per cent. Class-AA space was at 21 per cent, which was up 1.2 per cent, but class-A space dropped 1.7 per cent to 23.4 per cent.

According to Barclay Street data, the lower class buildings in the city’s core have been hit hard. Class-B space shows a 31 per cent vacancy, up 4.7 per cent, and class-C has risen by 3.2 per cent to 33.5 per cent.

Overall, the downtown office market had a record low vacancy rate of 0.3 per cent in the third and fourth quarters of 2006.

“TELUS Sky is not only an architectural gem that adds a vibrancy to our downtown core,” says Mary Moran, president and chief executive officer of Calgary Economic Development, “it also enriches the urban fabric of our city by bringing premium office space as well as several hundred residences to the city centre at a time when we are focused on the live-work-play approach to developing neighbourhoods.”

Mabberley says the residential component of the tower will comprise 260,000 square feet.

Retail will take up about 16,000 square feet of space. There is no current commitment for that retail space.

Residential units will be ready for occupancy in late February 2019.