On the surface, things seem to be in good shape for multi-family developers. However, there are a few issues coming to the surface that take a bit of shine off the optimism for the sector. 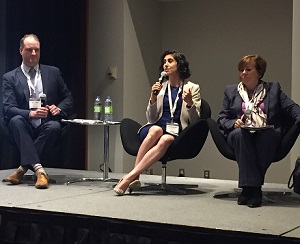 The good news is developers have started to construct more purpose-built rental apartments in the Greater Toronto Area (GTA) during the past 24 months, and the condominium market experienced both record sales and prices last year. But . . .

“We’re starting to see the first sign of some headwinds that are creating challenges in our market, and I think that’s going to be more of a theme through 2018, starting with cost escalation,” said CentreCourt Developments president Shamez Virani at a May 15 Land & Development Conference panel at the Metro Toronto Convention Centre.

“We’re seeing the first signs of pricing resistance on some more recent launches, which I think is a healthy thing when you have 35 per cent appreciation in the year prior. It begs the question: Are we at an overvalued state?”

Hines director of development Alexandra Khazzam said a vacancy rate of less than one per cent has helped push up rents to the point where developers have become more interested in purpose-built rentals than at any time during the past 40 years. However, with the introduction of new rent controls, rapidly increasing land prices, rising construction costs and the doubling of development charges, new challenges have cropped up.

“In the last few months we’ve seen a number of developers who said they wanted to build rental pull away from that,” said Khazzam. “They’ve either converted their buildings back to condos or just changed their plans entirely.”

She remains bullish on all of those markets and said the company would love to get its hands on a development site in Ottawa.

What renters and condo buyers want

More people now want to stay in the downtown core and live near their workplaces, even after they have families, so they’re being forced into living in high-rises because they can’t afford single-family homes in Toronto.

Khazzam said there’s a growing demand for two-bedroom suites, while one-bedroom units have the highest vacancy rate for both purpose-built rentals and condos (which have formed a shadow rental market for the past 40 years).

“One of the biggest trends we’ve seen across the country is the flight to quality,” said Morash, who noted such moves have even been evident in Calgary and Edmonton despite Alberta’s economic problems of the past few years.

This desire for higher quality has also led to a demand for more and better indoor and outdoor amenity spaces.

“We spend a lot of time doing research up front to make sure that we’re delivering a product that’s really future-proofed because we only build purpose-built multi-family, which on average has 30 per cent turnover each year,” said Morash.

“We have to make sure that we’ve delivered a product that we can resell 30 per cent each year. We typically like to have a blend of unit types in our buildings, but it depends upon the micro-market and how big the building is.”

Tara Welat, an associate at Robins Appleby Barristers & Solicitors, said she doesn’t see many developer clients building more than the 10 per cent requirement for three-bedroom units because many people can’t afford them. However, she noted some developers are looking for flexibility, so prospective condo purchasers looking for more space can combine two or three units.

CentreCourt is capitalizing on the emergence of a high-rise condo market in the 905 area code. Virani said that segment used to represent five to 10 per cent of the activity in the GTA, but was closer to 50 per cent in 2017.

CentreCourt had never launched a development north of Bloor Street until last year because it couldn’t make the margins it wanted. Now, it has sold 1,700 units in three towers in the Transit City Condos project it partnered on with SmartCentres (SRU-UN-T) in the Vaughan Metropolitan Centre.

The company is exploring other opportunities in the suburbs.

CentreCourt has reduced its parking ratios to 10 per cent in central Toronto and is willing to go as low as five per cent due to the popularity of ride-sharing and the looming introduction of self-driving vehicles.

Virani said 85 per cent used to be the typical parking ratio in Vaughan, but it had no problems in selling out Transit City Condos while offering parking for just 45 per cent of units.

The panelists were generally critical of policies introduced by the Ontario government and municipal governments, saying rent controls, development charge hikes and delayed approvals are creating a housing supply problem.

“We can’t find sites and we can’t zone them fast enough to meet the level of demand that’s out there,” said Virani, who anticipates relatively small condo price increases this year and sales of approximately 20,000 condo units in the GTA. That would be in line with recent years, apart from the spike in 2017.