A South Ottawa neighbourhood is about to see a serious intensification as a result of Timbercreek...

A South Ottawa neighbourhood is about to see a serious intensification as a result of Timbercreek’s revitalization of its extensive portfolio in the area. 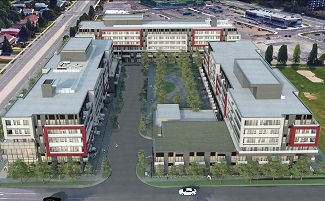 Construction is already well under way as Timbercreek replaces a block of 80 older townhomes – now demolished – with three, six-storey multi-residential buildings in its Herongate apartment complex. The site, at the corner of Heron Road and Sandalwood Drive, will contain 348 units as well as some ground-floor retail built over a podium garage.

The name for the new complex has yet to be revealed.

The four acres on which the project sits, acquired by Timbercreek in 2013, was previously occupied by some of the oldest townhomes in the neighbourhood.

The three new buildings will contain about 120 apartments apiece. Plans to have the complex open by spring 2019 are “on budget and on schedule” according to Greg Rogers, Timbercreek’s senior vice-president of development.

“It’s as much as you could hope for on any big project,” Rogers told RENX in an interview. “This is in excess of a $100-million project so there’s a lot of moving parts, but it was really well designed.”

Construction of the three new buildings is projected to cost $120 million. Timbercreek has also recently spent $30 million sprucing up the suites and common areas, and making repairs and upgrades in its neighbouring, existing apartment towers.

“This is a completely different product than what used to exist on this site,” said Rogers. “If this goes well, we’ll look at other options [for improvement]. At this point, all focus is on these particular buildings.”

When Timbercreek first proposed the development, it needed to resolve a number of issues, including accommodation of nine-foot ceilings in the apartments, which left the buildings about two metres above the 18-metre restriction in the area.

Timbercreek fought for, and ultimately won, the extra height.

Reflecting its target demographic for the buildings, Rogers said Timbercreek won the right to create just 0.8 parking spaces per unit, rather than the normal City of Ottawa requirement for 1.2 spaces plus an allotment for visitors. The development also features 220 bicycle parking spots.

The site has easy access to transit at the edge of the property, and is a short bus ride from the city’s existing LRT, which will soon connect to a much-expanded rail transit system coming online starting in 2018.

Retail tenants yet to be determined

Rogers said the allotment for retail has been approved, but what will go into the space is still being worked out.

“We applied to have the retail space facing onto the street,” Rogers said. “It’s good for the business owner to not only be relying on who lives in the building. We applied to deviate from the old planning guidelines which said it had to be oriented into the site.

“We would like to see something that is good for the community. Something that creates a good community feel, like a coffee shop.”

The buildings will offer one-, two- and three-bedroom suites to accommodate larger families that may have been looking for townhomes in the area. The average suite size is 1000 square feet.

“These are big units. You can actually live in them, which can’t be said for all condos,” said Rogers.

Amenities built into the project are designed to provide the resort-style living which Timbercreek wants to promote.

Building C (as it’s currently known) will contain a clubhouse that will house a gym, yoga room, indoor pool, party room and a rooftop patio with barbecues. The other two buildings will also have rooftop patios, while Building A will have a library room and the retail space.

Rogers said Timbercreek hopes to have the apartments open by spring of 2019.

Timbercreek will begin to lease the apartments somewhere between six and nine months before open.

“This is a terrific opportunity for people who are downsizing or looking for an alternative to ownership, especially when it comes to condos,” Rogers said. “There would likely be a lower cost to live in a unit this size, with these amenities, than there would be to buy something this size with less amenities in a condo building.

“We think we’re offering a great value for people looking for this kind of a lifestyle.”