Edmonton’s John E. Brownlee Building earned a BOMA BEST Gold certification in January and followed that by receiving a Building Owners and Managers Association (BOMA) of Canada TOBY Award for best government building at the BOMEX 2017 conference and exhibition in Toronto in September. 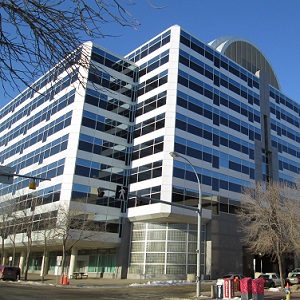 “In my mind what sets the Brownlee Building apart is the folks who operate it,” said Justin Smale, facilities energy and environmental analyst for Alberta Infrastructure.

“Brookfield GIS and our Alberta Infrastructure staff who manage the building do an exceptional job of ensuring the building is operating at the highest level possible and are always looking at ways that we could improve our operations.”

* three parking levels with 481 stalls below grade;
* an open atrium with a central core of six elevators;
* an escalator;
* a gift shop;
* the Cantata Café, which is operated by A Cappella Catering and serves a variety of food and drinks on the mezzanine level;
* a first aid room;
* an exercise room plus men’s and women’s locker rooms with lockers, shelving, benches, towel hooks, showers and washrooms;
* and a loading dock with two overhead doors.

The Brownlee Building is occupied by several agencies and departments of the Government of Alberta that employ about 2,000. It’s barrier-free and fully accessible.

There’s a large plaza on the west side of the Brownlee Building where tenants, the public and visitors can relax and enjoy the sun. The plaza is equipped with several benches and is surrounded by various shrubs, trees and flowers. Street vendors often set up shop nearby.

Alberta Infrastructure and BGIS encourage tenant participation in energy conservation campaigns, including: Earth Hour, where all non-essential lighting and equipment is powered down; and National Sweater Day, where the temperature is turned down by two degrees to encourage tenants to wear sweaters as a demonstration of how to save energy in the workplace and at home.

“We work hard to ensure sustainability and energy consciousness is built into the day-to-day operation of our buildings, and there are several opportunities each year to showcase that for our tenants,” said Smale. “We hope that can help raise awareness about the little things we can all do to reduce energy use in our daily lives.”

“The management team has done a great job at the Brownlee Building of identifying opportunities for improvement,” said Smale.

“T-8 lights have been changed to LED lighting. There’s been increased use of lighting motion sensors in low-occupancy areas, escalator modernization projects and HVAC system upgrades. All contribute to the lessened environmental footprint of the building.”

Building-wide group emails with important information about safety, security, events held within the building and other building-related news are sent to department representatives to keep tenants aware of what’s going on. BGIS also conducts monthly meetings with tenants.

The Brownlee Building also tries to play a role in the lives of non-tenants.

“The staff at the building does an excellent job engaging with the broader community,” said Smale. “Whether it’s providing space for community groups like Toastmasters, or providing programs such as the morning fitness boot camp that’s open for any tenants or members of the public, the staff on site goes above and beyond to be active members of the community.”

Alberta Infrastructure and Service Alberta host an annual fundraiser on the mezzanine level of the Brownlee Building in November and December that involves selling raffle tickets for different prizes. All proceeds are directed to the United Way to help support people in need within the community.

BGIS and Alberta Infrastructure also support smaller-scale charitable activities throughout the year and promote them to building occupants.

Alberta Infrastructure employs more than 900 people who operate more than 21.5 million square feet of space across the province.