The Toronto Catholic District School Board and Villa Charities Inc. are teaming up to create a $70-million “intergenerational community hub” along Lawrence Avenue in the city’s North York district. 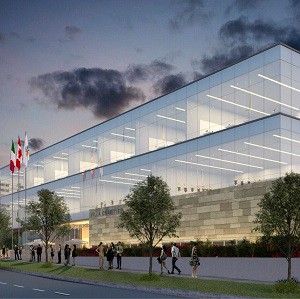 The Toronto Catholic District School Board and Villa Charities are teaming up to create a new $70-million Columbus Centre and Dante Alighieri Academy.       (Rendering created by Caramel Inc.)

“The partnership of the Columbus Centre and Dante Alighieri Academy is a unique model of collaboration, efficiency and innovation,” Anthony DiCaita, Villa Charities president and CEO,  said in a release announcing the project.

“This reimagined space has been designed to honour our legacy and heritage, while providing a more contemporary and progressive vision for the community . . . a space more vibrant, multi-dimensional and intergenerational than ever.”

The two organizations say this is the largest co-development project of its kind, and the only one currently underway in North America.

When it is completed in 2020, the state-of-the-art facility will include:

* The Dante Alighieri Academy which will house approximately 950 students;
* The Columbus Centre, a community centre which serves as a hub for Toronto’s large population of Italian descent;
* A new 435-seat performing arts centre;
* A half-kilometre outdoor pedestrian/running circuit around the site, with a parkours for community use;
* New event and banquet spaces;
* Restaurant, art gallery and a high-tech culinary studio with digital learning technology.

The project is designed to accommodate intergenerational needs, combining the school and a wide range of facilities for both the community at large and Toronto’s Italian-Canadian community.

Plans are in place to vacate the current facilities by the end of 2017, with construction to begin in February 2018.

“This reinvigorated facility will enable us to provide a collaborative, inspiring and 21st-century learning environment for our students, in addition to a variety of educational, cultural and volunteer opportunities,” says Angela Gauthier, Director of Education of the Toronto Catholic District School Board.

Fully accessible for all patrons

It will be fully accessible for patrons of all abilities, more energy-efficient and will include a green roof.

Villa Charities is a registered charity which promotes Italian heritage and culture in the GTA. The organization also operates Villa Colombo Services for Seniors in Toronto, four apartment complexes for independent seniors and the Joseph D. Carrier Art Gallery.

The TCDSB says it is the world’s largest publicly funded Catholic school board. It provides education for more than 92,000 students in 201 elementary and secondary schools in Toronto.