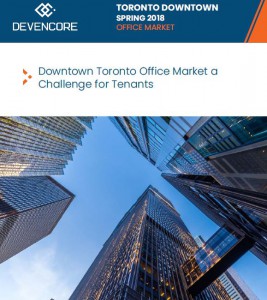 That rate – which is for all classes, not just premium space — is continuing to drop, the brokerage and advisory firm notes in the report. It calls the sector “very much landlord-favoured.” The trend is expected to continue for the next couple of years – at least until 2020 when space being constructed during the current development cycle will start becoming available.

“Over the next few years the inventory of downtown office space available for leasing will continue to shrink. Vacant contiguous spaces greater than 25,000 square feet are extremely rare, and will remain so for the foreseeable future.”

The report notes more than 400,000 square feet worth of new leases were signed during the quarter, despite average gross rents which have hit $47.91 per square foot, and closer to $60 per square foot in the financial core for Class A space. Class B rates are at $44.21 per square foot.

The majority of leasing is focused on the Class A market, driven in large part by the technology, financial and service sectors.

There are some leasing opportunities in older Class A buildings backfilling space vacated by tenants moving to newer buildings, but this space is leasing up. The TD Centre at 222 Bay St., has just leased over 95,000 square feet to BDO Canada and SAP Canada, while the Exchange Tower secured Tim Hortons, which is moving into a new 64,268 square foot head office from its current Oakville site.

Devencore says The Exchange still has about 160,000 square feet of vacant space, while the Royal Bank Plaza also has “significant” vacancy.

Buildings being delivered prior to 2020 are either fully leased, or close to it. The King Portland Centre is slated for completion in 2019, but is fully leased. The Daniels Waterfront-West Tower slated for delivery later this year has only 17,500 square feet available.

All  this continues to push some prospective tenants outside the core, where vacancy rates range from 3.6 per cent in the midtown district to 14.5 per cent in Toronto west.

New office space in 2020 and beyond

“The good news is that a new development cycle is fully underway and over 5.5 million square feet of office space is scheduled to be delivered to the market in 2020/2021,” said Schaffer in the release. “Even then, demand will likely continue to outpace supply as over 50 per cent of the space now being built has already been pre-leased.”

In addition to King Portland and Daniels Waterfront-West, the following major office towers are under construction: