A sneak peek at the Toronto of the Future

It was not hard for a visitor to pick out the star of the Toronto of the Future real estate display gracing the city’s Metro Hall. 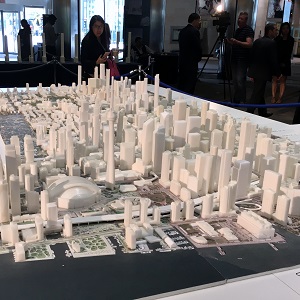 Toronto of the Future is a free exhibit at downtown Metro Hall through June 30. (Paul Brent image)

It’s the huge, 3D scale model of the city, complete with familiar landmarks such as the CN Tower and bank buildings, new-built towers and ambitious skyscrapers still in development.

Even real estate veterans can be tested to determine what is newly built, or just planned, given the rapid state of construction in the downtown. (Older vintage buildings are easier to identify by the yellowing of their foam bodies).

The gleaming white cityscape, which normally graces the offices of Toronto’s Mizrahi Developments, is an irresistible vision of Toronto’s past, present and quickly approaching future.  Looking over the 3D map is a daily ritual for company president and founder Sam Mizrahi. “It is quite amazing.”

The 3D cityscape has added importance for Mizrahi Developments asthe company is working on construction of what will be the city’s (and Canada’s) tallest tower. The One, at One Bloor West, is an 82-storey retail and condo building that will reach 1,005 feet.

The First Canadian Place is currently the city’s tallest building at 978 feet.

“It is bragging rights for Toronto and for Canada. It is the tallest building in Canada and we are quite proud of it,” said Mizrahi.

Even a few years ago, the proposal for a 1,000-foot building in the city’s midtown would have met fierce opposition. Not so now.

As many as three other 1,000-foot-plus buildings are currently in the planning stages but Mizrahi expects to be the first with construction of The One commencing in September.

“I hope we inspire others to do more buildings like that.”

Visually striking, The One was designed by the famed Foster + Partners along with Core Architects.

Future of Toronto on display

The free Toronto of the Future Exhibit runs until Friday, June 30 at Metro Hall, at the corner of Wellington and John streets.

Beyond the 3D scale model of Toronto, the exhibit features illustrations, renderings and virtual presentations from top architects, contractors, developers and government agencies, including the City of Toronto’s planning division.

The displays include various projects under construction, approved, planned or envisioned, but all will inspire conversation about the evolution of a great city.

“Toronto is a leading city in the Western Hemisphere with respect to the unprecedented scale of urbanization, redevelopment and renewal we see today,” said Jennifer Keesmaat, chief planner of Toronto’s city planning division.

“We expect this trend of rapid change to continue and as a result we need to continue to push our thinking with respect to what the city could become.”

The event is co-hosted in collaboration with the City of Toronto and Oxford Properties Group. The first biennial edition of the event was held in the same venue in June 2015.

A similar event was pioneered in Montreal and those organizers are also behind the Toronto exhibit.