Canada’s major cities are growing and Toronto mayor John Tory told those attending the Real Estate Forum that it will take all levels of government and participation from the private sector to ensure that they reach their full potential. 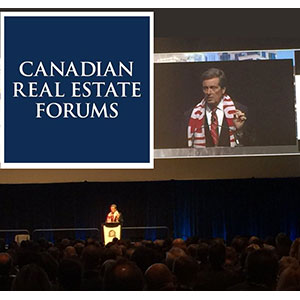 “City councils of the past here have been pretty good at approving the office buildings and condo towers, but not so good at improving and paying for the infrastructure that must go with those buildings,” Tory told a packed hall of hundreds of people at the Metro Toronto Convention Centre on Wednesday morning. “That must include proper public space and proper public transportation, schools, recreational facilities and libraries.

“The bottom line is that none of those things are free. People in this business who are creating growth and benefiting from growth are going to have to be among those who make contributions to making sure that in the future we don’t do what we’ve done in the past, which is to put off for another day the infrastructure that must accompany this development.”

Tory opened the session with a short speech and was then asked questions by Real Estate Forum co-chairs Blake Hutcheson, the president and chief executive officer of Oxford Properties, and Peter Menkes, the president of Menkes Developments Ltd.’s commercial/industrial division.

$33 billion in approved but unfunded projects

Tory said there have been $33 billion in approved but unfunded projects in Toronto over the past few decades, and that the time has come to invest in infrastructure and public transit in order to ensure a prosperous future. To pay for this, he said the three main options were: massively increasing property and other taxes; selling assets such as Toronto Hydro; and introducing measures like road tolls on the Gardiner Expressway and Don Valley Parkway.

Tory thought the third way was the most fair and forward-thinking solution, as he believes that user-pay systems are appropriate for public infrastructure projects.

“Forty per cent of the people who use these roads aren’t paying taxes in this city, and all of the costs of maintaining these roads rests with the city taxpayers. I didn’t think that was fair.”

Tory said that all of the construction that’s taken place in downtown Toronto over the past 10 years has transformed its skyline, and office and condominium towers continue to be built as the area becomes even more of a “centre of finance, commerce and technical innovation.” He called the city’s 988-acre Port Lands area, to the southeast of the core, the “biggest single development opportunity in North America.”

Even with all of this development occurring, Tory said that affordable housing and public transit are the two biggest issues that major cities must face to ensure they can cope with current and future growth and remain livable. Many people are becoming marginalized and don’t have access to adequate housing and economic opportunities, and many can’t afford to live near where they work.

Toronto Community Housing oversees 58,000 apartments that are home to about 164,000 residents, making it the second biggest landlord in North America, and much of its housing is sub-standard or in need of repair.

Tory aims to transfer some of Toronto Community Housing’s responsibilities into smaller pieces run by non-profit organizations, using private sector discipline to carry them out better. He asked those in the audience to work with the government to help initiate programs that will increase the supply of affordable rental housing.

As more people continue to want to live and work in Toronto and other large Canadian cities, Tory stressed that they need more respect from the provincial and federal levels of government.

“Cities have access to eight cents of every tax dollar paid in this country,” he said, noting that the amount isn’t adequate to cover such things as delivering affordable housing, schools, recreation centres, parks, hydro, police and emergency services that city governments are responsible for.

Tory said big cities are the country’s economic engine and will continue to be because of increasing migration to urban areas, and that they should try to present a united front on issues so they have more clout when dealing with the federal government and trying to attract foreign investors.

“This is not meant to diminish the role of smaller towns and cities, but we have to acknowledge that we have some economic champions that are driving the country and driving government revenues that are being redistributed.

“I believe that a rising tide lifts all boats.”

Tory added that major Canadian centres should be competing with the likes of Hong Kong, London and New York City, and not with each other.