A prime piece of Toronto real estate already zoned for mixed-use development is on the block and attracting interest from a variety of potential purchasers ahead of the offer submission deadline of noon on Friday. 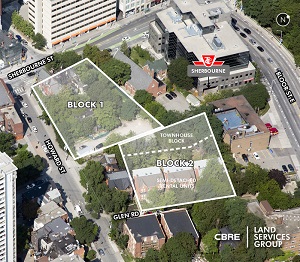 These two blocks of redevelopment land at Howard and Sherbourne streets in Toronto are on the sales block. CBRE is handling the sale. (Image courtesy CBRE)

The site at the northeast corner of Howard and Sherbourne Streets, near Bloor Street, encompasses 50,785 square feet and includes two approved development blocks separated by Redrocket Lane. It’s owned by a syndicate of developers and investors called Bloor Parliament Investments Limited. The sale is being handled by CBRE.

Block one is occupied by three vacant homes but zoned for a 50-storey mixed-use building with approximately 428,000 square feet of buildable gross floor area and a maximum of 470 residential units. One house will be demolished while the other two will be incorporated into block one.

“It has zoning in place and anyone who comes forward just has to go through a site plan,” said CBRE executive vice-president Mike Czestochowski, who oversees the company’s Land Services Group and expects approval for the purchaser’s site plan to take from six to 12 months.

Czestochowski believes the site will carry a price premium of at least 40 per cent because it’s already approved and there’s limited inventory and plenty of available money held by both domestic and foreign investors.

“We’re starting to see more activity from them, and more and more of them are opening offices that have representatives here on the ground in Toronto,” Czestochowski said of offshore investors. “That gives them the ability to act quickly, as they have the consultants and lawyers and everyone lined up to do the due diligence on sites.”

Other developments in the neighbourhood

The site is located close to the Sherbourne subway station and is within walking distance of such neighbourhoods as Yorkville, Rosedale and the Danforth.

“The area is getting nothing but better as development occurs,” said Czestochowski. “It’s seen a big transition and, as new condos are being built along Bloor and just off it, you get better quality retail that comes forward, the streets get busier at night and people feel more comfortable.”

Tridel’s launch for the nearby Via Bloor condo development last year resulted in more than 90 per cent of the units being sold within the first three months. Occupancy is scheduled for 2021. Units are currently available for $862 per square foot in one tower and $962 per square foot in another.

“Do I think we’re going to crack $1,000 per square foot in the end unit prices? Yes, based on the activity level and people requesting information and calling us,” Czestochowski said of the potential for Bloor Parliament Investments Limited’s site, noting the lack of similar and available properties in downtown Toronto.

The site is also zoned for approximately 11,000 square feet of retail and commercial space that Czestochowski believes would be appropriate for a bank branch, boutique grocery store, restaurant or offices for doctors and other service providers.

The purchaser won’t be required to dedicate any parkland or make a cash-in-lieu payment to the City of Toronto since this was already addressed by the vendor as part of a previous transaction for another block of land.