As office vacancy rates continue to tighten in Canada’s largest markets, almost 13 million of the country’s more-than-15-million square feet of office space under construction is concentrated in Toronto, Montreal and Vancouver, a mid-year report from Avison Young reveals. 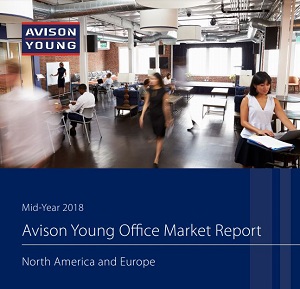 In the case of Toronto, the volume of construction compares favourably with other major international cities such as London, Mexico City, Washington and New York, Avison Young says in the report.

“It’s great to see so much confidence on the part of developers as they respond to the supply-demand imbalance in many markets,” said Avison Young chair and CEO Mark Rose in a prepared statement. “As always in this industry, the inherent risk is that circumstances could change, resulting in an oversupply of product at the time of delivery.

“In many cases, this scenario is the result of external economic and geopolitical factors. This time around, however, the new influences of disruptive technologies and increasing co-working space availability are also affecting how and where people work, potentially impacting the office sector from within – and challenging conventional wisdom.”

There are several trends driving the activity in Toronto and Vancouver (and to a lesser extent, Montreal and several of Canada’s other larger markets), including the desire by many companies to locate, or relocate, in a downtown area.

“Demand from traditional sectors is being augmented by the proliferation of domestic and global technology and co-working firms, ongoing urbanization and a burgeoning millennial workforce – all part of Canada’s emerging innovation economy.”

“Urbanization – partly attributable to growth in the technology sector – has created a noticeable gulf between downtown and suburban vacancy rates in emerging tech hubs such as Vancouver, Toronto, Waterloo Region, Ottawa and Montreal,” Argeropoulos said in the statement.

“Given tight conditions and upward pressure on rents in some of the nation’s downtown markets, and with little or no near-term supply relief, suburban markets – particularly those offering transit connectivity and other urban amenities – may be the beneficiaries of overflowing tenant demand during the next couple of years.”

Suburban markets combined for absorption of nearly 3.4 million square feet – reducing the suburban vacancy rate a half point to 13.1 per cent. Winnipeg has the tightest at just 5.5 per cent, though that stat could change in coming months as major downtown office completions pull in tenants from the suburbs.

The downtowns combined for more than 2.2 million square feet of absorption – led by Toronto, Vancouver and Edmonton. This reduced the national downtown vacancy rate 80 basis points (bps) year-over-year to 10.5 per cent.

Of particular note is Toronto’s downtown vacancy rate (2.2 per cent), the lowest in North America. Downtown vacancy in Toronto and Vancouver remains significantly lower than suburban vacancy, and is one of the factors driving those statistics.

– Of the 15 million square feet under construction, 52 per cent is preleased;