While leasing activity in the Toronto North and East office markets lags behind the city’s buzzing downtown, they’re not struggling to keep up with new developments coming on stream as is the case in Toronto West. 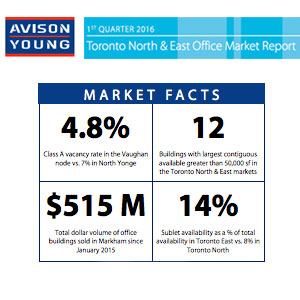 “What’s different in the north and the east is there’s a limited supply in the pipeline and whatever’s being developed in terms of larger projects has been well known in the marketplace for a while now,” said Bill Argeropoulos, principal and practice leader, research (Canada) for Avison Young, which recently issued its “1st Quarter 2016 Toronto North & East Office Market Report.”

“That includes the new KPMG Tower that will soon be completed in the Vaughan Metropolitan Centre as well as Aviva’s new development in the northeast end.”

Occupancy levels in Toronto East increased by 144,000 square feet and lowered the quarter-over-quarter availability and vacancy rates to 13.2 per cent and 11.7 per cent respectively. Available space has tended to linger for a while in a lot of cases and, although it remains a tenant’s market, some changes seem to be afoot.

“There has also been some good momentum in that some large blocks of space have been removed from the market,” said Argeropoulos, citing TD Bank Group’s absorption of space vacated by American Express at 101 McNabb St. in Markham when it leased new premises at the Atria complex on Sheppard Avenue near the Don Valley Parkway.

“There have also been some larger renewal deals that have been completed in the marketplace, which shows that corporate users are attracted and are staying in the east market, particularly in the Highway 404 and 407 as well as the 404 and Steeles nodes.”

Toronto North contracted by 59,000 square feet from the previous quarter, although the availability rate of 8.1 per cent and vacancy rate of 6.3 per cent were both lower than a year ago. The north Yonge corridor, which extends from Yonge Street and York Mills Road in the south to north of Yonge and Finch Avenue, has more than 75 per cent of the office space in the Toronto North market.

“That has been one of the tightest suburban markets for quite some time,” said Argeropoulos.

“It’s also one of the markets which has seen very little new development. The last large office project was the Transamerica Tower at 5000 Yonge St., which was built back in 2004.”

While the north Yonge corridor has higher taxes and operating costs than other Toronto North nodes, corporate users have been driven to it because of its access to highways and the Yonge subway line. Still, there has been some recent corporate downsizing (including Procter & Gamble at 4711 Yonge St. last year) and relocations that have brought some space back on the market.

There are a few corporate users assessing their future space requirements, which may introduce additional large blocks of empty space and push availability and vacancy higher over the next 24 months.

“That would create some leverage opportunities for some of those tenants that have leases potentially coming up in the next two to three years that they can use against the landlords,” said Argeropoulos. “At the same time, it allows opportunities for some tenants in those buildings that may experience a large block of availability to be able to expand, which they couldn’t do in the past.”

The Vaughan node has seen a steady rise in occupancy and become a hub for new development with the 15-storey, 365,000-square-foot KPMG Tower and the expected announcement of another new office tower housing a professional services firm in the 400-acre Vaughan Metropolitan Centre, Canada’s biggest urban development project.

It will also be the home of the terminus subway station as part of the Toronto Transit Commission’s 8.6-kilometre, six-station extension of the University-Spadina line north from Downsview.

Liberty Development’s The Offices at Centro Square development at 7777 Weston Rd. will add approximately 150,000 square feet of space in Vaughan by the end of the year.