While Dunpar Homes has been building houses across the Greater Toronto Area for more than 30 years, The Ossington townhome community is its first purpose-built rental development. 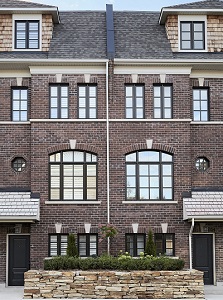 Dunpar purchased the site on Ossington Avenue, between Dupont Street and Davenport Road in Toronto’s Bloorcourt Village, in 2007. The original intent was to build a condominium townhome community that would be completed in 2015.

Delays in receiving approvals and a gentrifying neighbourhood, however, persuaded Dunpar to cancel existing deals and build and rent 54 luxury three-bedroom townhomes.

“It’s going to be a pretty vibrant neighbourhood, especially in a few years,” said Dunpar chief operating officer Michael DiPasquale. “There’s a lot going on there, so we thought this would be a great location to hold on to.”

What The Ossington offers

Unit sizes range from 1,505 to 1,931 square feet and rental rates start at $3,750. The townhomes come with either one or two above-ground parking spots.

A number of people have moved in and DiPasquale is optimistic the complex will be fully rented by summer.

Dunpar was founded by its president, John Zanini, and it has built its reputation on building quality townhomes in the 1,500- to 2,000-square-foot range.

With Toronto home prices skyrocketing over the past few years, many people can’t afford a deposit to buy a new house, but they might not want to purchase a small condominium suite or rent an older home. That’s where projects like The Ossington can fill a gap, according to DiPasquale.

“We think there are a lot of people who want extra space and want to be on the ground and want to have their own exterior space where they can have a barbecue and a table and a hose so they can wash their car,” he said. “There’s a demand for that, especially with new builds.”

DMS is managing The Ossington

While Dunpar manages some smaller properties it’s holding for potential redevelopment, management of The Ossington is being outsourced to DMS Property Management since the company wants to maximize rents and tenant satisfaction for the long term.

“We didn’t want to learn the hard way, so we hired an expert at it,” said DiPasquale.

Owning The Ossington site for more than 10 years made the decision to go the rental route much easier, since Dunpar didn’t need to pay much higher land prices. Last April’s expansion of rent controls didn’t change the company’s plans.

“It’s still very workable for us,” said DiPasquale. “If we’d bought it in 2013 and just started building now, based on land prices it probably wouldn’t work.”

Dunpar’s first mid-rise development near Prince Edward Drive and Dundas Street West in Etobicoke, which is under construction and should be completed early next year, will likely be marketed as a high-end rental as well.

Lakeshore Village, at 68 Daisy Ave. in south Etobicoke near Lakeshore Boulevard and Kipling Avenue, will include 73 three-bedroom, three-bathroom townhomes and semi-detached houses ranging in size from 1,580 to 1,785 square feet and featuring one- and two-car garages.

The site is the former home of Vincent Massey Junior School, where the Degrassi Junior High television series was filmed in the late 1980s. The building is now Vincent Massey Day Care and Nursery School. It will be retained and Dunpar’s houses will be built around it. It’s being sold now, with prices in the low $900,000s.

Construction should start soon and occupancy is expected in the spring of 2019.

Streetsville Centre, a former industrial property at 80 Thomas St. in the small town-like Mississauga suburb of Streetsville, is just off the main street and across the road from a GO Transit station.

Streetsville Centre’s 201 townhomes and semi-detached houses are on sale now, with prices in the mid $800,000s. The 1,500- to 1,875-square foot homes feature three bedrooms, two or three bathrooms, and two-car garages. Construction should start late this year or early next year, with occupancy slated for about two years later.

Dunpar also has two commercial condo projects in its plans. The first, Jutland Square in the Islington Avenue and Queensway area of Etobicoke, is on sale now. It will have 58 units ranging in size from 1,838 to 7,200 square feet. Prices are in the high $800,000s and construction should start this summer.

Sales have also just begun for the other commercial condo, Middlegate Commercial Centre, near Dixie Road and The Queensway in Mississauga. Construction should begin next year on the 88 units ranging in size from 2,232 to 17,856 square feet. They’re priced in the high $800,000s.

Both projects will have two floors and 12-foot ceilings. DiPasquale said they’re well-suited for offices for lawyers, architects, doctors, dentists, technology companies and other professionals.

Dunpar will build and sell the building shells and rough-in utilities. It will be up to purchasers to finish the units, or they can contract Dunpar to do so. Units can be combined to create larger spaces.

“You can almost buy a space and finance it and operate it for almost half the cost of renting in an ‘A’ building,” said DiPasquale. “And you get to own an asset that will appreciate.”