Toronto’s Templar Hotel is on the auction block

Bidding opened at one dollar for The Templar Hotel, a luxury boutique property in downtown Toronto, this week. 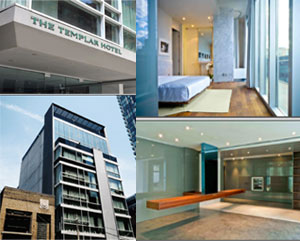 Abramovitz’s client is holding company CVC Ardellini Investments while the mortgagor is Templar Hotel Corporation, which declared bankruptcy in May 2015 with more than $40 million in liabilities, “leaving a trail of unpaid suppliers and employees,” according to a May 16, 2016 Toronto Star article.

The Star article stated that the companies that owned or were associated with The Templar, or their directors, were named in 20 lawsuits filed by trades people, suppliers and others since 2001. Several resulted in judgments against former owners Del Terrelonge and John Wee Tom.

Construction began on The Templar in 2004 but it didn’t open until 2012 due to various complications and problems. It’s located at 348 Adelaide St. W., about a block east of Spadina Avenue. It includes four penthouse suites, a lobby lounge, rooftop and street level patios, gym facilities and the street front Parcae restaurant. All of the rooms have high-end finishes and floor-to-ceiling windows.

More than $1 million has been spent since last September on renovations that included improvements to the heating, ventilating and air conditioning system, window framing, new bathrooms and suite upgrades.

“I think it’s a good time to attract international buyers,” said Abramovitz of the timing for making the Templar available for purchase.

“We think it’s a perfect storm right now with what’s going on in the marketplace with regards to Brexit and the crisis in Europe with all of the refugees pouring in. We’re finding that Toronto is becoming more of a safe haven.”

The Templar was listed for $13 million a couple of years ago. The opening bid for it started at a dollar this week because Abramovitz said “setting a price for a hotel can sometimes stalemate a property.” It won’t be sold unless its undisclosed target price is met.

“We think that the market will generate enough activity that we’ll have a strong buyer step up to the plate,” said Abramovitz. “The bottom line is that we’re going to sell at the right price.”

Bidding closes at 5 p.m. on July 29 and Abramovitz hopes to close on a sale 30 days after that.

“Bidding wars can sometimes get crazy these days and we could have a cash bidder that could close in three days,” he said.

While The Templar has had a relatively low public profile since opening, it has hosted private parties and events for the likes of the Toronto International Film Festival, Toronto Fashion Week, Rudsak, Spyder, Aveda and basketball legend Kobe Bryant. Rap star Drake did a photo shoot at the hotel this spring.