At the start of last year, few could have predicted the U.K. would vote to leave the European Union or that a billionaire real estate investors and reality TV star would become the U.S. president. 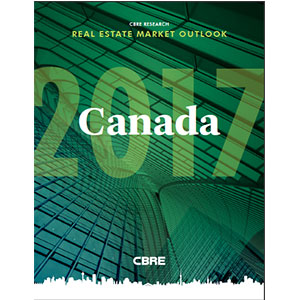 Or that both occurrences would be a good thing for Canadian real estate.

So far, at least, the impact of Brexit and Donald Trump have been a net positive for Canada’s real estate sector, Mark Renzoni president and chief executive of CBRE told a Toronto audience at the RealCapital conference this week.

“One thing that clear is that Trump’s influence is adding to global uncertainty and in times of uncertainty, capital seeks global safe havens,” he said.

“As a result, our country and industry are attracting record levels of capital. Foreign buyers were responsible for over a quarter of all investments in 2016.”

That flood of foreign money has cemented Toronto’s status as “the true leader of gateway cities around the world.”

If that statement sounds outrageous, Renzoni noted Toronto “has the lowest downtown office vacancy rate of any major North American city.” That’s not too shabby considering it has added 4.5 million square feet of new development.

Toronto also boosts the second-lowest industrial availability in North America and multi-family vacancy rates amongst the lowest on the continent.

Add in hotels “full to the brim” with record revenue growth and Toronto being ranked in the top 10 globally for attracting talent and the future looks bright.

As well, Toronto enjoyed more than $12 billion of commercial real estate transactions in 2016 “at record prices.”

“The tech industry is a leading example of industries expanding in this new economy,” he said. “They represent almost 25 per cent of current leasing activity” in Canada’s largest city.

If Renzoni’s RealCapital talk was celebratory, a follow-up speech by another CBRE executive was a bit less cheery.

Canadian commercial real estate has had a good run in the years following the great recession, but the environment is going to get tougher going forward, warned Paul Morassutti, executive vice-president and executive managing director of CBRE Ltd.

“Change in every aspect of the market is inevitable, it is accelerating, and it is ubiquitous,” Morassutti said.

“These overriding trends are sparking ongoing changes in, and will continue to influence, tenant and investor demand for commercial real estate.”

Morassutti identified a “heightened level of both geopolitical and economic uncertainty and added to that mix is dramatic technological change.”

As Renzoni noted, some of that uncertainty is good for Canadian RE, with recent sales of trophy properties in Toronto and Vancouver producing record low cap rates, resembling rates commanded in New York, London and Paris.

Morassutti noted automation will have a major impact on leasing demand, with one study stating more than 40 per cent of jobs could be lost to automation.

What would robo-investing or robo-law and robo-accounting mean for offices filled with investing advisors, law and accounting firms?

For an answer, Morassutti looked to the advent of financial automatic teller machines in the 1970s, which today number in the millions and should have resulted in the closure of thousands of bank branches and the elimination of most bank teller jobs.

“The number of bank tellers has actually doubled,” Morassutti said. “Why hasn’t automation eliminated the need for tellers and what are all these tellers doing?”

It turns out ATMs allowed banks to create more, smaller branches and freed up tellers to offer other services – “they became less like checkout clerks and more like salespeople, forging relationships with customers and introducing them to new products.”

He sees a similar situation occurring with the rise of artificial intelligence. Rather than a job-killer, it could result in a job shift.

“Some jobs without question are going to be obsolete, but new jobs are likely to emerge. The problem is the transition will be painful.”

He pointed to a recent CBRE study on the financial services industry which predicts the elimination of back office jobs and the creation of jobs in areas such as digital media, software development, data science and creative industry.

“The finance sector is expected to act much more like technology firms in terms of innovation, employee retention and attraction, and workplace services.”