Tsawwassen Mills on schedule to open in October

Steady progress continues to be made on Ivanhoé Cambridge’s Tsawwassen Mills shopping centre in British Columbia ahead of its projected Oct. 5 opening. 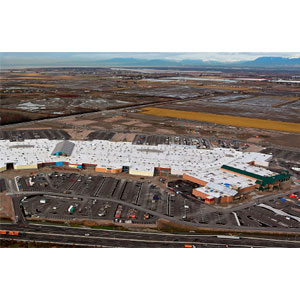 “Interior construction is now starting to focus on common-area finishes, with retail tenants starting to take possession of their spaces in June.”

Additional retailers were recently announced as part of the mix of premium fashion-brand outlet stores, dining and entertainment options expected to draw customers from the Greater Vancouver region, Vancouver Island and the United States.

Tsawwassen Mills is located at Highway 17 and 52nd Street on Tsawwassen First Nation lands. It’s a 30-minute drive north of the Washington border and less than five kilometres from the Tsawwassen Ferry Terminal.

“We are very pleased with the leasing activity that we have had to date and the amount of interest that has been expressed by unique and new-to-market retailers,” said Brown. “We are forecasting to open Tsawwassen Mills at or above our budgeted occupancy target.”

Restaurants will include Milestones and Montana’s BBQ & Bar. There will be an 1,100-seat food court and 6,000 parking spots.

Several Tsawwassen First Nation joint venture companies won contracts to build components of the project and significant offsite infrastructure was delivered alongside the construction of the shopping centre.

“The road improvements have been largely completed, with the Highway 17 improvements open to the public and the remaining roads to be finished within the next one to two months,” said Brown.

Property Development Group is developing a power centre called Tsawwassen Commons directly north of Tsawwassen Mills. It will be about 550,000 square feet in size and be anchored by Walmart, Canadian Tire and Rona.

The long-range plans for the Tsawwassen First Nation lands call for approximately four million square feet of industrial development and 3,500 residential units. The initial phases of residential and industrial building are currently under construction.