The Tsawwassen Mills shopping centre, built and managed by Ivanhoé Cambridge on Vancouver’s Lower Mainland, has been named “Best Outlet Centre” in the annual MAPIC Awards in Cannes, France. 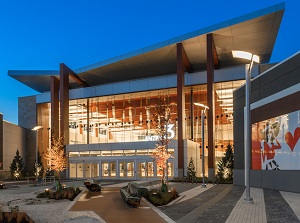 The 1.2-million-square-foot facility is what Ivanhoé calls a “hybrid” shopping centre which contains factory outlets and premium fashion retailers.

“We are honoured to be recognized on an international scale as an industry leader,” said Claude Sirois, Ivanhoé Cambridge’s president, retail in a release Monday morning. “From the start, our objective for this development was to capture the attention of a truly global audience, which makes receiving this award a significant milestone for our community of stakeholders.”

The MAPIC Awards were created in 1996 to reward excellence, innovation and creativity in retail real estate. The awards applications are based on tenant mix, location and architecture and finalists are selected by a jury of trade and commercial real estate professionals. This year’s winners also include Nike, Nespresso, iFLY World and Prado.

“We’ve experienced a lot of growth in one year, which we attribute to identifying a market need in the Lower Mainland,” said Ruby Paola, vice-president of leasing, Ivanhoé Cambridge, in the release. “Tsawwassen Mills was designed to meet many shopping needs from outlets to premium brands, while providing a variety of family-friendly entertainment options.

“Our multiple-offer approach has enabled us to service the surrounding communities while growing as a tourist destination.”

Tsawwassen Mills offers 180 retailers, including six unique to the Lower Mainland, and is one of Canada’s largest malls. It is a fully enclosed mall and features five “distinct shopping neighbourhoods” – Fashion, Outdoor Life, Coast Salish, City, and Nature.

The facility, which opened in October 2016, was built to LEED Core Shell status.