Two joint ventures have been formed to construct about 2,200 apartments in Toronto — 30 per cent of them designated as affordable housing — the developers announced on Friday. The projects also incorporate retail and possibly office space. 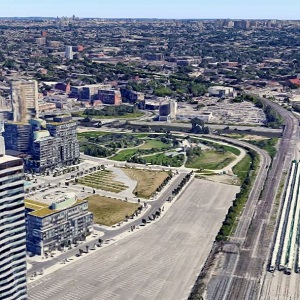 In the second development, Canadian Real Estate Investment Trust (REF-UN-T) and Greenwin Inc. are partners on a 700-unit project. They are acquiring a 0.9-acre lot near the intersection of Yonge and College streets on a 50-50 basis.

The Dream/Kilmer/Tricon lands are five development sites in the West Don Lands totalling nine acres, surrounding the intersection of Cherry and Mill Streets in the downtown east district. The lands are close to the Distillery District, Canary District and Waterfront Toronto’s Quayside, as well as Google‘s 13-acre-Sidewalk Labs proposed Sidewalk Toronto neighbourhood.

The partnership hopes to begin construction during Q2 2019 with initial residential occupancy targeted for 2021.

The project will be designed to achieve LEED Gold certification for sustainability.

“The partnership is pleased to have been selected to develop this vital project in support of the Province’s Affordable Housing Lands Program, as part of the Fair Housing Plan,” Kilmer chairman Ken Tanenbaum said in a release on behalf of the partnership. “We have assembled a team with a proven track record to create a complete community, and we will do so on an expedited basis to meet the rental housing needs of our growing city.”

Dream and Kilmer previously partnered on the Pan Am Athletes’ Village and developed the Canary District in the West Don Lands, an award-winning mixed-use community of 1,800 condominiums and 60,000 square feet of retail. Dream has also co-developed the historic Distillery District since 2004.

CREIT and Greenwin Inc. are partners on the second development, acquiring the 0.9-acre lot near Yonge and College streets on a 50-50 basis. The site is within walking distance to College TTC subway station, the University of Toronto, the hospital network and the downtown financial core.

“Development projects of this calibre are difficult to acquire,” said Rael Diamond, president and CEO of CREIT, in a separate release, “so we are very pleased to have the opportunity to add this project to our development pipeline.”

CREIT and Greenwin plan a two-tower, purpose-built rental development with approximately 700 units, 30 per cent of which will be affordable rental housing for a period of 40 years.

The purchase is expected to close in early 2019. CREIT says due diligence conditions have been satisfied and the agreement is subject only to severance and other standard closing conditions.

“Our city is in need of affordable housing and we are excited to partner with the Ministry of Housing and the City of Toronto to deliver on this important objective in creating sustainable, affordable housing in a mixed-income setting,” said Cary Green, chairman of Greenwin, in the release. “Together with our partner CREIT, we are looking forward to executing on this unique opportunity.”

About the principals: West Don

Dream has approximately $14 billion of assets under management in North America and Europe, including residential land and housing development, condominium and mixed-use development, asset management for four TSX-listed trusts, investments in and management of Canadian renewable energy infrastructure and commercial property ownership.

Over its 50-plus year history, Kilmer has actively built or helped to build a number of leading Canadian businesses in such areas as construction and building products, sports and media, cable operations, electronics assembly, textile manufacturing, publishing, food processing, charitable gaming and environmental rehabilitation.

Tricon is a principal investor and asset manager focused on the residential real estate industry in North America with approximately $5.9 billion of assets under management. With 30 years of experience, Tricon has more than 19,000 single-family and multi-family units under management or in active development.  Tricon owns or manages land and homebuilding assets, single-family rental homes, manufactured housing communities and purpose-built rental apartments.

CREIT owns and manages a diversified portfolio of retail, industrial, office and residential properties. It is currently being acquired by Choice Properties REIT in a transaction valued at about $6 billion, including assets, debt and other liabilities. The transaction has received virtually all approvals and is scheduled to close on May 4. When completed, the acquisition will make Choice Properties Canada’s largest REIT.