A Vancouver-based developer is planning to build two new office buildings in the historic Railtown district of the city. 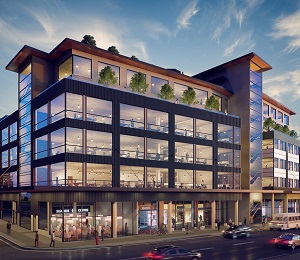 The Maker Exchange is one of two new office developments planned in the historic Railtown district of Vancouver. (Rendering courtesy of Rendition)

“It’s the first new buildings to be in Railtown in probably 40 years,” he said.

The vision is to make The Maker Exchange project an ecosystem for innovation, technology and creative product manufacturing with every aspect of the building made to inspire.

“Railtown is one of the oldest commercial neighbourhoods in Vancouver. It was where the mills used to be and the CP Rail line started there at the turn of the century,” said Roche. “(It is) a very industrial part of town.

“It kind of got left behind as the city grew up. Then in the mid to late 1990s it started to slowly get developed. The artists started to move in because it was very old school buildings … kind of a funky neighbourhood just east of Gastown.

“So it started to get redeveloped then and also it was cheap office space for companies moving to be very close to downtown but getting a cheaper location. It grew into a tech hub starting in the late ’90s, early 2000s. Companies like HootSuite started there.”

Roche said The Maker Exchange will be flooded with natural light and views of the waterfront and the North Shore mountains. It will have adaptable floor plates and every aspect of the building is designed to inspire – from soaring ceiling heights and premium finishes, to its many outdoor meeting spaces ideal for stimulating collaboration.

The Maker Exchange’s office and retail spaces will be home to technology, digital media, content creation, advanced and traditional manufacturing, rehearsal studios as well as showroom, retail and restaurant spaces.

“An architectural icon, The Maker Exchange has been designed to take into consideration the historic value of the neighbourhood while becoming a lasting landmark in the heart of Railtown,” says marketing material for the project. “A balance between modern design in an industrial context, The Maker Exchange features the latest high-tech and sustainable materials in an emerging neighbourhood with a storied past.”

Roche said there will be two levels of underground parking with 161 stalls.

The marketing campaign for the project was launched last fall and Roche expects to begin construction in August with completion by the third quarter of 2020.

There will be a number of outdoor decks and a common rooftop deck. The ground level will have space for a coffee shop, restaurant and furniture show suite displays. Roche expects about 15 different entities to occupy the building.

“We are paying homage to the old area of Railtown by using materials that will complement and represent what’s been in Railtown over the years like corrugated metal, brick, metal awnings.

“We’re trying to build something new but that will fit in and respect the neighbourhood. It will be an all-concrete building — concrete floor, concrete ceiling. We’re doing high-efficiency heat and cooling. Lots of glass,” he said.

The other building in Railtown, Bench, is designed to be a collaborative micro-community of entrepreneurs, innovators, and creators. Roche expects to have perhaps six tenants in that building which will start construction in April and be completed by July 2019.

Roche started his own business in 2003 which was originally a construction, development, management, consulting company. He always had a vision of becoming a developer.

In 2007, he bought a construction firm and partnered with them, helping to grow the company into the business of developing. In 2013, he decided to part ways and go out on his own with Rendition Developments.

Since then, he’s been developing and building for himself as a merchant developer.