Two of Vancouver’s newest rental apartment buildings are on the sales block. 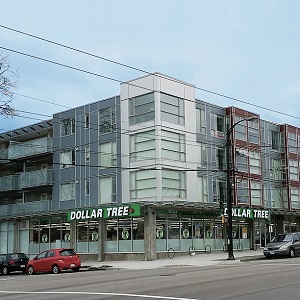 This purpose-built apartment building, with ground floor retail, at 2215 East Hastings Street in Vancouver is one of two similar buildings up for sale via broker HQ Commercial. (Image courtesy HQ Commercial)

Both properties are listed by HQ Commercial. Listing agent and HQ Commercial Principal Mark Goodman told RENX current owner Vittori Developments Ltd., built the apartments and is now looking to cash out. The buildings could be sold together or separately, he said.

“This company is sort of a boutique builder and a lot of developers and builders just don’t have the infrastructure or the business model to manage properties,” he said in an interview.

Goodman said the East Hastings buildings are coming up for sale amid soaring property values and extremely low rental vacancy rates in the city.  Both buildings also include retail space on the ground level.

Goodman said older buildings in the city are fetching cap rates of 2-2.2 per cent, meaning newer such buildings are providing a slightly better cash flow.

Older buildings in the city are seeing just as much rental demand, but typically have lower rents, he said. “The investor (of older buildings) is willing to inherit a low cap rate, albeit temporarily, because they know they can create value over time on a turnover or updating the building.”

Goodman said the investment market for could recoil from rising interest rates, which have been earning headlines in recent weeks.

“The concern for renters is just finding a place to live,” Goodman said, “and not having the security if the suite turns over. It’s very hard to find accommodation if they’re evicted for renovations.”

The two listings are coming to market with a backdrop of rising land values and a decreasing number of multi-family listings, according to a report by Goodman’s firm that assessed the first half of 2017.

“The few newly available listings have experienced off-the-charts interest, with multiple showings and unconditional offers being the norm,” Goodman said in the report.

“Meanwhile, cap rates are continuing to fall, and prices per door are breaking through to new highs,” he said. “It is our opinion that owners have seen the future and want a piece of it.”

The number of deals in the first half of this year fell by 30 per cent compared to the same time period last year, but the overall dollar value attached to the sales climbed by 23 per cent, from just under $1.1 billion to $1.35 billion so far this year.

The section of East Hastings has been gentrifying in recent years, with several low-rise apartment and condos going up along the main transit route that links downtown Vancouver to North Burnaby.

Goodman said the area hasn’t been as highly regarded in the past as other points in West Vancouver for multi-family development, but that’s changing.

Small, local investors have been showing some early interest in the buildings, he said. “We’re also getting some interest out of institutional players; larger groups who like the fact that they can pick up a significant acquisition, two buildings, within six blocks of each other,” he said.

“An investor could potentially get a foothold in a new neighbourhood with 71 units right off the bat, so that’s quite attractive for the larger guys.”