While four senior banking, insurance and capital market executives generally believe Canada should emerge “relatively unscathed” from the uncertainty of what’s to come in the United States and Europe this year, it seems it’s still a somewhat uneasy investment environment. 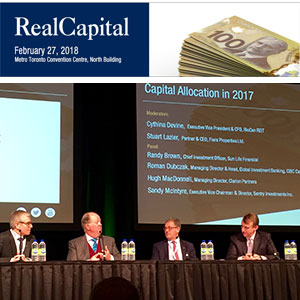 “The world is awash in cash looking for a stable home,” Sun Life Financial chief investment officer Randy Brown said at the Real Capital conference at the Metro Toronto Convention Centre on Tuesday.

“The uncertainty in the U.S. is pushing people to look at some other markets. Europe is quite unstable,” added Brown, who also cited geopolitical instability in the Middle East and Asia as well as the potential for China to implement policies to curtail the flow of capital leaving the country.

Global investors view Canada positively as a safe haven from a credit-quality perspective, according to Roman Dubczak, the managing director and head of global investment banking for CIBC Capital Markets. He doesn’t anticipate disruptions, but also warns against complacency.

“One needs to be a bit fleet of foot in terms of financing your assets and investments and in the way you package your business because the capital markets are going to change.”

Brown also believes the potential for implementing stronger tariffs and reducing labour movement between Canada and the U.S. could cause problems for Canada and that the overall uncertainty regarding the American government’s actions has negative implications for long-term investors.

“We’ve elected a shaman who’s supposed to magically transform the economy, and the voters are going to be disappointed,” he said. “When they evict the labour force from California that works in the agriculture industry, are the displaced coalminers from Appalachia going out to take those jobs?”

Hugh MacDonnell, who’s originally from Toronto but has lived and worked in the U.S. for the past 20 years and is managing director of Clarion Partners, believes the Trump administration’s plans to cut taxes and regulations and invest in infrastructure will sow the seeds for gross domestic product growth in Canada as well as the U.S. “if they’re executed correctly.”

While China has been the biggest foreign investor in Canadian real estate of late, Canada has invested more than any other foreign country in U.S. real estate. MacDonnell believes the return on investment will be lower in Canada than south of the border, but that there are fewer risks in Canada.

While interest rates could go higher, they still aren’t viewed by the four panelists as a significant factor for the real estate market in the near term.

MacDonnell cited a study that looked at the U.S. over the past 40 years. He said interest rates rose by 130 or 140 basis points in a relatively short period eight times during those years. Real estate values rose on six of those occasions, remained flat once and went down once in the early 1990s.

Disruptive technology is impacting the office market, as younger workers look to become more mobile and workspaces are being altered or consolidated. While Dubczak said these factors haven’t yet had an effect on pricing, he expects they will next year.

Brown pointed out other ways that technology can influence the real estate sector, including: a growing sharing economy; crowd-sourcing becoming a provider of capital; last mile retail distribution; and the effect of driverless trucks on shipping and driverless cars on parking needs.

“Our occupancies are close to the highest levels that they’ve been in years. We see rent bumps in place. We see constant growth in rents in the markets that we own these assets. So our outlook for the next couple of years is very good.

“We don’t see an exogenous shock that will impact values necessarily, so we think our core asset portfolio generates eight to 10 per cent with modest leverage. We think that’s a great place to be invested, and I suspect that everyone in this room has parts of their portfolio that looks and feels that way.”