Save-On-Foods will be an anchor tenant for the retail portion of West Campus Development Trust’s massive Calgary University District development. 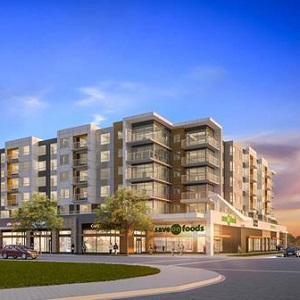 The announcement of the 38,000-square-foot store was made this week, along with the release of new details on the retail portion of the mixed-use project (for a full story on the development, see Building underway at Calgary’s massive University District).

“We are excited for Save-On-Foods to be a part of University District,” James Robertson, president and CEO of West Campus, said in a release.

“A grocery store is a cornerstone in any neighbourhood and it is important for our residents to move into a complete community from Day One – to have access to a day-to-day service that changes the quality of life.”

Nine additional retailers will be part of the grocery store block, chosen to meet a host of community needs and interests — from a neighbourhood coffee shop, specialty restaurant and pet store to a wine merchant.

West Campus said further announcements on retailers will be made during the coming months, along with updates about a hotel tenant and builder.

Hotel, other retail announcements to come

The hotel will be located across the street from Save-On-Foods and the retail block.

The University District store, with its northwest Calgary location, marks Save-On-Food’s sixth store in the city. It will break ground at the end of 2017 and is anticipated to open in 2020, just after the scheduled arrival of University District’s first residents.

Above the grocery store, the mixed-use rental building, built by Gracorp Capital Advisors Ltd., will feature 288 units of residential space. The units are anticipated to be one- to three-bedroom floor plans from 528 to 1,130 square feet.

It will be the first mixed-use building constructed on the site.

“The vision for University District is for it to be one of Calgary’s most livable communities, offering mixed-use residential and retail opportunities, giving residents everything they need in one central location,” Barry Poffenroth, director of real estate at Gracorp, said in the release.

“We are offering housing options with size, space and flexibility in a more compact form with easy accessibility to the grocery store and other retail services along the main street.”

Save-On-Foods is a century-old retailer known for customizing each store to the needs of the neighbourhood by carrying more than 2,500 locally made products from more than 2,000 local growers and producers. It operates nearly 150 stores across Western Canada.

Gracorp is a merchant-style, private market real estate developer with offices in Vancouver, Calgary and Toronto. It is a subsidiary of the Graham Group, one of Canada’s largest construction companies.

From office, retail, hospitality, industrial and institutional to multi-family residential, Gracorp partners with a variety of landowners, developers and investment firms to deliver real estate investment opportunities to the marketplace. Gracorp is currently involved in developing seven projects in Canada and the Pacific Northwest totalling approximately $760 million.

West Campus Development was created by the University of Calgary to act as the developer for the 200-acre master planned University District. The university owns the land and will share in the financial returns from the development.