The Urban Land Institute Toronto District Council is leading the charge to address the gender gap in the male-dominated property development industry. 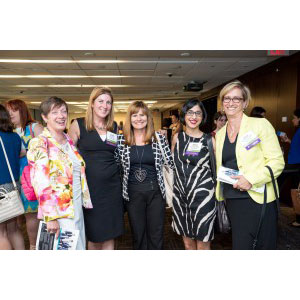 The Toronto council is in its fourth year of involvement with the Women’s Leadership Initiative, a campaign supported by Urban Land Institute councils across North America to encourage more women to become involved in the real estate, land use and development sectors.

One highly visible part of the Toronto program is the WLI Championship Team, nearly 130 members strong and set to grow again this summer.

“All (the inductees) are related to development real estate in some way,” committee co-chair Meg Davis explained.

“It’s really quite a breadth”

“People from the finance and banking worlds who might be involved in real estate transactions, planners, urban designers, architects, lawyers, government people like myself who work for municipalities, consultants, engineers; it’s really quite a breadth of anyone who would touch the development process at some point or another.”

Davis knows of what she speaks when it comes to business leadership. She is the chief development officer for Waterfront Toronto, and a charter inductee to the Championship Team when it was formed in 2014.

Nominees will be accepted via the Urban Land Institute Toronto council’s website until March 31. Those inducted will be part of a special luncheon event in June.

ULI Toronto executive director Richard Joy said even with this initiative, in his 1,500-member organization the split is 32 per cent female and 68% male. There has been progress, but he believes the gender gap is even more pronounced as one progresses up the management chain.

“Women are especially underrepresented in the more senior leadership roles in the land use (and) real estate sectors,” Joy said. “By profiling women leaders, we will increase leadership opportunities.”

The Championship Team is just one aspect of the program. Among the other facets are:

* Women on Board, pushing to get more women into senior positions and onto boards of governors;
* She With He, which helps women rise within the ranks of their own companies;
* Mentorships to assist young women or students just entering the field.

“She’s a perfect example of a woman who is in a position that, for women, is a little tougher because it’s a REIT. Those positions are often dominated by our male counterparts,” Davis said.

Member of the Championship Team

Being part of the inaugural Championship Team induction was a real honour.

“I’ve been at this now for 30 years,” Davis said. “I feel so privileged to be where I am. I am a chief development officer, something I didn’t know I would ever be able to achieve. . . . So I do feel those opportunities are there for women.

That is something not lost on Joy. He says ULI is “walking the walk” and cites one highly visible example.

“There’s a term that a lot of people use, that there are a lot of ‘man-els’ in the real estate industry when it comes to thought leadership on programming,” he said. “ULI is really proud of the fact that we don’t really, ever, present all-male panels.”

He also acknowledges men must be part of the solution.

“The responsibility of creating leadership opportunities for women falls equally to men. This is a responsibility for both genders to be committed to.”

Davis has seen plenty of change during her career. But, as evidenced by the sheer existence of the Women’s Leadership Initiative, there is still room for improvement.