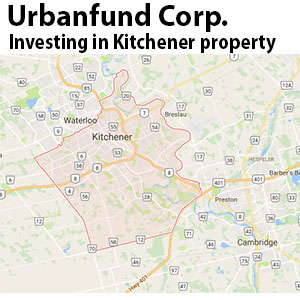 A Google map that shows relationship between municipalities of Kitchener, Waterloo, Cambridge.

Urbanfund (UFC-X) is contributing 87 per cent of the $2.1 million being paid for the 16,700-square-foot site at 51, 55 and 59 Scott St. that’s immediately adjacent to its 17,000-square-foot property at the corner of Scott Street and Weber Street East that was acquired in January 2016 for $1.25 million. The deal is scheduled to close in early April.

“We’ve assembled almost half an acre of prime residential land in downtown Kitchener,” said Urbanfund president and chief executive officer Mitchell Cohen. “It’s a great opportunity in a perfect location, right across from the brand new regional court and mere blocks from the future LRT at Frederick.”

Cohen described his Toronto-based real estate development and operating company’s two unnamed partners as “small investors,” one of which is local to Kitchener.

“We like partnerships,” he said. “You get to spread the work and triple your knowledge.”

The Scott Street site is occupied by vacant houses that will be demolished to make way for the new apartment development. While there are no firm plans yet in place, Cohen said the added land will allow the partnership to do something “more exciting” than it could have done with a smaller property.

Urbanfund also has a controlling interest in the limited partnership that acquired a multi-residential rental complex at 61 Roy St. W. for $400,000 in October 2015 that’s being renovated. That property is adjacent to a previously purchased 40-unit heritage apartment building at 48 Weber St. W. that received an overhaul.

“We’ve been very happy with our little portfolio in Kitchener and would like to do a lot more,” said Cohen.

“There are great opportunities and I really enjoy our relationship with City Hall. They’ve definitely shown that they’re open for business.”

The two-building, 64,000-square-foot complex near the intersection of Goreway Road and Williams Parkway had 40 units and was 94.2 per cent occupied when purchased with the intention of renovating it and converting it to condominium units that will be sold to current tenants or other investors.

“That’s a part of the market that we think is underserved, and we’re going to be looking for more opportunities like that,” said Cohen.

“It’s these niche markets and niche opportunities that we like and excel at. We’re a public company, but we’re pretty nimble when it comes to these opportunities.”

Urbanfund has a market cap of almost $17 million. Its other real estate assets are in Belleville, London and Toronto in Ontario and Quebec City and Montreal in Quebec.

“We’re of a size that we can be in all asset classes, and I like that. We’re a small company and are under the radar of most people, but we like all asset classes. We have retail, residential, industrial and some land banking.”