Urbanfund Corp.‘s recent acquisition of a multi-residential rental development site in Kitchener, Ont., is as much about the market as the property for president and chief executive Mitchell Cohen. 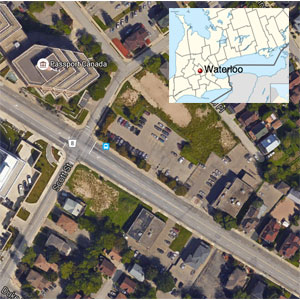 “We really like Kitchener-Waterloo. We think it is a great residential, commercial and retail marketplace,” Cohen said.

The Toronto-based real estate company (UFC-X), which paid $1.25 million, has big plans for the 17,300-square-foot property at 59-65 Weber Street West.  The site is across the street from the new Region of Waterloo Consolidated Courthouse and 300 metres from the proposed Franklin LRT station.

The company has proposed to construct approximately 62 purpose-built rental units on the site. Pending the receipt of municipal approvals, construction of the low-rise project should begin in the fall with occupancy beginning approximately 12 months later.

“It is great doing business with the municipality, we have gotten a little bit of a head start, and we are looking to build a purpose-built apartment building,” said Cohen.

“It is currently under major renovations,” Cohen said. “It was pretty much an abandoned building with a couple of squatting tenants and we purchased it, took it over and with the city did our approvals and are totally renovating it.

“People are just starting to move back in.”

The “very historic building” is, like the new development site, located in the Civic Centre heritage district, one of Kitchener’s oldest neighbourhoods.

CBC earlier reported 12 tenants were forced to leave in mid-July after city officials deemed it unfit for human habitation. The renovation effort included plenty of cosmetic repairs, broken windows and the replacement of all appliances, as well as balcony railings requiring repair.

Urbanfund has also acquired two three-plexes just around the corner from its other Kitchener holdings. “We are working with the municipality to clean them up and turn them into legal five-plexes,” Cohen said.

For Cohen, the attraction of the Kitchener-Waterloo marketplace is not so much about reduced property competition compared to GTA municipalities, but rather the staying power of the area’s information technology industry base.

“It is just such a fresh new marketplace with the high-tech. Everyone was writing the epitaph for K-W when Blackberry imploded but Google is taking over. It is just a different environment.

Look for Urbanfund to continue its push in the K-W market and keep its focus on Ontario’s southwest.

“We are keeping our eyes and ears open for K-W, and southwestern Ontario,” Cohen said. “We have been looking also in Windsor. Windsor has got its mojo back now. When you hit rock bottom, you start going back up.”

Part of Windsor’s rebound can be at least partly attributed to its cross-river sister city of Detroit, which is also bouncing back, he said.

Urbanfund has already had two unsuccessful bids on properties in Windsor, but will continue searching there and in its “home” market of K-W.

“Primarily we are still looking in K-W and we will pick up another acquisition soon.”

While multi-res properties are the company’s main focus, “we might surprise you and pick up some retail and commercial. We are opportunistic even though our mainstay is multi-family residential.”

UrbanFund’s portfolio includes a small strip mall in London, Ont.; an 81-unit townhouse development at Sheppard Avenue and Don Mills in Toronto; an 80,000-square-foot outdoor community mall in Belleville, Ont.; and 10 per cent of a 1,700-unit apartment portfolio in Quebec City and Montreal.