The number of multi-family rental apartment transactions in Metro Vancouver dropped by 23 per cent through the first nine months of 2017 while the overall dollar volume for deals jumped by 35 per cent. 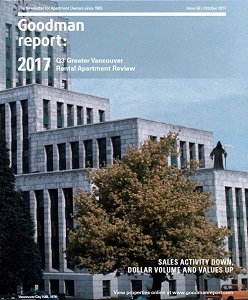 The Goodman Q3 2017 report on Vancouver apartment investment sees less activity as prices rise and other factors affect the market.

“There was a slowdown in the number of sales transactions because of a few factors, in Goodman’s opinion,” said Mark Goodman, a principal of The Goodman Report and HQ Commercial, which specializes in rental apartment building and development site sales in Metro Vancouver.

Goodman cites what he called a “surprising” drop in building sales in a high-demand market to:

There were 62 transactions in Vancouver and 52 in its suburbs in the first three quarters of this year, according to the David Goodman-founded company’s latest report. That compares to 86 and 62, respectively, during the same period last year.

Many of the purchases were of older, mostly low-density and inefficient purpose-built rentals, co-ops and strata complexes acquired for the redevelopment of rental or market housing. Goodman estimates almost one-quarter of the apartment buildings sold from the beginning of January to the end of September will ultimately be redeveloped.

The Goodman team sold 17 properties, made up of apartment buildings and development sites, valued at $337 million through the first nine months of the year. It currently has nine properties for sale totalling $200 million.

While The Goodman Report’s research indicates the number of new rental units in the pipeline is slowly increasing as compared to previous years, they won’t come close to addressing the extreme shortfall of supply.

Vacancies in all rental categories remain exceptionally low throughout Metro Vancouver and are expected to come in below last year’s Canadian Mortgage and Housing Corporation rental market report figure of 0.7 per cent for the Vancouver census metropolitan area, according to the report.

The Goodman Report estimates 16,178 rental units are expected to be delivered into Metro Vancouver’s rental pool by 2022, which isn’t sufficient for the 150,000 expected to be added to the population in that time.

Goodman calculated just 837 rental suites from seven projects will be added to Vancouver’s inventory this year.

Among the purpose-built rentals due for completion next summer and fall, according to Goodman, are: Wesgroup’s 270-unit rental project in the 130-acre master-planned River District; Bosa Properties’ 168-unit apartment at 1155 Thurlow St.; and PCI Group’s 388 Kaslo, a mixed-use development that will feature pedestrian-oriented retail and 94 rental apartments above.

In light of low vacancy rates and the demand for purpose-built rental housing, Goodman believes more land should be zoned for apartments in Vancouver and that the moratorium should be lifted on the city’s 11-year “pilot project” forbidding the demolition and replacement of old rental stock.

“There are many buildings sitting in disrepair where owners would welcome the opportunity to replace old decrepit buildings with new ones, and where the stock could increase five- to 10-fold.

“Additionally, there are some official community plans that are already adopted where the majority of the area was zoned for rental-only development. Why is there a supply choke in Grandview Woodland and only one project applied for in Marpole? The reason: severe red tape and bureaucratic bungling.”

With an asset class that already has “too many existing barriers to entry,” according to Goodman, applying community amenity contributions to new purpose-built rentals is a mistake that could further hinder construction.

“When market fundamentals magically intersect to suddenly make rental projects feasible after 40 years without this happening, it’s time to get out of the way and let it happen,” said Goodman.

“Municipalities need to make a decision. Are you building rental for the immediate future or for the long-term success of our communities?

“What may be a luxury rental today will be affordable below-market housing 30 years from now. Charging community amenity contributions on market rental projects is a significant disincentive to moving forward with a project.”

Looking forward into the new year, Goodman forecasts: increasing rents; continued severe vacancies; a modest slowing of transactions due to a shortage of apartments for sale despite it being a coveted asset class for investors; prices maintaining current levels; and increased interest in building multi-family rentals.