Massive commercial property deals in Vancouver in 2016 signaled a new wave of transformative investment similar to that of the city’s residential market in the 1990s, says the managing director of Macdonald Commercial Real Estate Services. 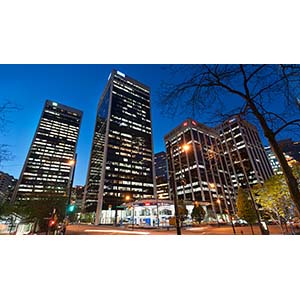 By the mid-point of 2016, Vancouver’s commercial property market had already reached a record high in overall deal volume marked by huge trophy purchases of downtown office towers including Bentall Centre I, II, III, and IV as well as the Royal Centre tower and the United Kingdom Building. Those three assets alone — sold separately — totaled nearly $1.57 billion, according to Colliers International Metro Vancouver Investment Report, which tallied deals over the first six months of the year.

The $320-million Concord Pacific purchase spurred a period of residential high-density development north and west of Science World — a marquee section of the city that continues to evolve today.

The scale of interest from property buyers in downtown Vancouver office assets shows a new appetite for Vancouver that rivals that transformative era, Letvinchuk said.

“When we have two transactions beside each other for approximately $1.5 billion in the same year, it will send a signal that Vancouver is a place to invest commercially,” he said, referring to Bentall Centre and Royal Centre.

There are a lot of global and domestic investors trying to get ahold of scarce trophy assets in Vancouver, he said.

Macdonald has indeed aimed to tap into that offshore investment. In 2014 the firm opened a branch office in Shanghai offering assistance to Chinese investors looking to make property buys in Canada.

The recent numbers from Colliers suggest more of that money is coming here.

Overall commercial investment through the first half of 2016 totaled $4.28 billion across 819 transactions in Metro Vancouver, eclipsing 2015’s full year total of $4.25 billion across 695 transactions, the report said. Deal sizes grew larger too, with 16 transactions of $50-million or more.

“It’s been our busiest year in volume for commercial real estate,” Letvinchuk said, noting the office sector experienced a four-fold increase over the previous year. He said the main reason has been historically low interest rates over an extended period of time.

“We keep looking for signals which will show that there will be increases in interest rates, but so far that has just not happened,” he said. “In fact, with the disruption caused by the Brexit result, one of the outcomes was lower interest rates as capital flows went into North American debt markets, which pushed rates down even further.”

“Not only do we have interest from all around the world, and specifically China, but we also have local investors… who have seen huge equity gains,” he said. “There’s a tremendous amount of equity in the system.”

Will the new residential tax drive up commercial investment?

Policy decisions in the property markets in B.C. have also led to a lot of debate and head-scratching this year. At the beginning of August, the provincial government launched a 15% tax on residential property purchases by foreigners, leading some to believe that could stoke the commercial market even more.

Letvinchuk said it remains too soon to cast judgment on whether that’s happened or not.

That new tax, however, would likely turn some attention from foreigners to smaller commercial assets, such as strata office or strata industrial, he said. “We see it under the million-dollar range for the strata retail or office product, and it will take some time for the (foreign) investors to get used to commercial lease obligations and the management of those properties.”

Real estate is the investment story of 2016 in B.C.

Property, of all types, was certainly the investment story of 2016 in British Columbia, said Cameron Muir, the chief economist with the B.C. Real Estate Association.

“When we started 2016, all eyes were on the real estate sector because people were looking for yields,” he said this week. “The stock markets were going nowhere and the interest rates were incredibly low.”

He said real estate seemed to be the only place to build capital for investors.

Muir remains optimistic about the trajectory of the commercial market in Vancouver as we move into 2017.

“We expect that commercial activity is likely going to increase over the next few quarters. It’s at quite a high level right now. I think rate of change is going to be slower,” he said. “Overall, if we look in Vancouver in terms of commercial real estate assets… there will continue to be a lot of money chasing some pretty scarce assets.”