Despite the emergence of massive First Nation development organizations in the Lower Mainland, partnerships with local developers remain in their “infancy,” says the head of the Tsawwassen First Nations Economic Development Corp (TEDC). 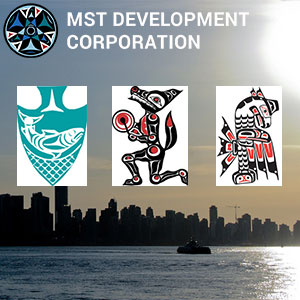 Images from the MST Development Corp. website represent the three First Nations involved in the partnership.

“There remain lots of opportunities, but there is a real steep learning curve in terms of how to deal with First Nations, their lease structure, their culture,” TEDC CEO Chris Hartman said during a panel on development partnerships with First Nations at the Vancouver Real Estate Forum on April 11.

“For too long, First Nations have been considered less than sophisticated by the marketplace, and so it’s important for the marketplace and the brokers and the developers to understand how to manage that relationship.”

However, Hartman and others warn many pitfalls remain if those partnerships are not handled with care and attention.

Together with Ivanhoe Cambridge, TEDC has developed Tsawwassen Mills, a massive 1.8 million-square-foot shopping centre along Highway 17 that opened last year, as well as a 300-acre business park.

The band has also partnered with Aquilini Development on Tsawassen Shores, a multi-phase plan to build 2,200 homes over the next decade.

Meanwhile, the Musqueam, Squamish and Tsleil-Waututh First Nations have partnered to create MST Development Corp. The three nations own or co-own six significant properties across Metro Vancouver, with more than 160 acres of developable land valued at $1 billion, according to their website.

Hartman said his nation has been successful with the treaty process, in part because it adopted a municipality style of government developers are used to dealing with.

Moreover, they pulled their lands from the federal registry and put them into the provincial land titles office,“because that’s what investors understood,” he said.

The Lower Mainland is experiencing a boom across all real estate sectors, encouraging private developers to join forces with local bands to unlock valuable land for development.

But he had words of caution for developers looking to make a quick buck. “I do get a number of calls, and I won’t name them, saying ‘Jake, I want to get this piece of land, what do I have to give the First Nations?’ I say, ‘let’s stop there’.”

“It’s not a land transaction where the (bands) are looking for you to provide a cheque or something else,” he said. “It’s really about trust and relationship and building those bonds.”

Must learn history, culture and governance

Learning about a First Nation’s history, culture and system of governance is the first step, McEwan said.

There are more mega deals on the horizon as land-use regulations come into focus.

“The First Nations in Canada are on a huge winning streak in terms of land title court cases,” he said. “I think they’ve won five major cases in a row. So, I think you’ve seen a lot more clarity around aboriginal rights and title.”

Nowhere is that more true than in Metro Vancouver, which is running out of land, he said.

“Developers have really come on to saying, ‘We’ll do the work and we’ll spend the time along with the First Nations gaining some more capacity and having more experience with land development.’ Those partnerships are growing.”

He said MST now “dwarfs” other large private development companies in Metro, including Polygon and Concord Pacific. “They’re suddenly the biggest developer in the Lower Mainland, bar none.”

“All of a sudden the big five (banks) are clamouring,” he said. “Now they’re asking us for advice: ‘How do you get in this game?’ ”

More opportunities are becoming possible outside of Metro Vancouver, Moores said. “I still see opportunities in the Fraser valley, in the Okanagan and Vancouver Island,” he said.

Each First Nation has a unique history, lineage, government style and treaty process, said Moores, who says he’s worked with roughly 100 First Nations around the country.

“Land goes to the soul of communities”

“Land is beyond just something to earn a living off of,” he said. “It goes to the soul and the history of the First Nation communities. That can’t be neglected.”

“We’re talking about jobs that lead to careers. . . . You can’t just give menial jobs and therefore you get permission to develop,” he said. “It’s bringing on community members for internships in your organization, sending them across the province to different sites. It’s a commitment, rather than boxes to tick.”

Developers should also understand their participation in a successful venture with First Nations might only be needed temporarily.

“Some of our best partners are in a position where, at some point in their business ventures, they will be bought out by TFN,” Hartman said. “Because we will advance ourselves financially and in a capacity-building side where we don’t need them anymore.”