The vacancy rate in Metro Vancouver’s office market crept down over the second half of 2016, marking a relatively robust demand for work space in both the downtown and suburban markets. 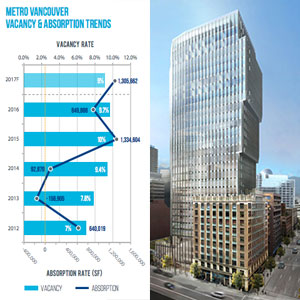 The office vacancy rate across the region dropped from 10.4 per cent in June 2016 to 9.7% at the end of the year, according to Avison Young’s Metro Vancouver Year End Office Market Report.

The report covers the cities of Burnaby, Richmond, Surrey, New Westminster and the North Shore, and separates the City of Vancouver into three sub-areas of downtown, Yaletown and the Broadway Corridor.

Vacancy in the downtown core had reached 9.8% — a 10-year high — in the middle of 2015, riding a wave of new office development builds. Many market observers and stakeholders expected the downtown vacancy rate would surge even high, but it has instead fallen.

“Ultimately we saw vacancy decrease again, and if you would have asked people three or four years ago would vacancy continue to decline right now they probably would have said no because of all the new buildings that came onstream,” said Glenn Gardner, a principal with Avison Young in Vancouver.

Businesses have done a “remarkable job” absorbing the new space that emerged in the downtown market since 2014, including gobbling up the older spaces left vacant by companies moving into the new towers, he said.

Gardner said the low vacancy rate sends a positive message about the regional and provincial economies. “Existing tenants continue to expand, business is doing well, business is coming into the market place.”

The downtown market appears balanced but couldn’t be described as “super strong” just yet, said Jon Stovell, the president of Reliance Properties.

“Tenants are taking their time and making selections meeting their criteria. I would call it a steady market,” he said.

Reliance has a portfolio including about 10 office buildings in Vancouver, mostly older heritage buildings of a brick-and-timber vintage.

“The vacancy we do have, in most cases, is actually vacancy we just bought and we’re already leasing it out,” he said in an interview. “We’re quite full.”

The Exchange tower coming to downtown

In downtown Vancouver, the next major office project to come online will be The Exchange tower by Credit Suisse and SwissReal Group. It’s a 31-storey tower with 362,000 square feet of space located at 475 Howe Street.

The Exchange Tower has raised eyebrows over its lack of tenant announcements. So far only National Bank has confirmed it will take about 35,000 square feet in the new tower, set to open in late 2017 or early 2018.

Mark Chambers, executive vice-president at JLL – the listing agency for The Exchange – confirmed to RENX National Bank is the only tenant inked so far, but he said he expects the building to fill up over the next year.

“The market is very different today,” he said. “Technology tenants are the most active users in the market. These are users that make decisions six to 12 months out.”

He said they are now entering that period and are discussing leases that would begin in January 2018. Without divulging names, Chambers said their discussions are starting to pick up.

“We have a lot of paper moving around right now on the building and some notable-size tenants as well. I’d like to think we’ll have more to announce in the coming weeks.”

Stovell said they’re now launching construction of their office component at Burrard Place, part of a massive multi-tower residential and commercial complex in the southern end of the downtown peninsula. “We’re already getting some long lead interest from some larger tenants,” he said.

Stovell said he wasn’t among those who worried the downtown vacancy rate would climb to 12% or higher.

“I don’t think that we thought it was going to go up as much as (other) people thought. But by the same token, we were bracing for a little bit more fallout in our sector,” he said.

Positive news in the suburbs, too

The story remains positive in the suburbs as well, said Josh Sookero, another principal with Avison Young who specializes in markets outside of downtown.

The City of Richmond, neighbouring Vancouver to the south, went from an office vacancy rate of nearly 20% only five years ago, to just over 10% now.

Sookero said the cities of Burnaby and Surrey have also rebounded well in the last year, especially in high-density hubs built up around SkyTrain line stations. “There are very few large block spaces available, and that’s actually common . . . across all the municipalities,” he said.

The one outlier remains the City of New Westminster, which is experiencing a vacancy rate of more than 17.4%, the highest rate since 2012.

“I’ve done a lot of work in that municipality over the years,” Sookero said. “It’s almost a forgotten office or business zone.”