Vancouver developer and landlord Reliance Properties will provide double the financial compensation it is legally required to offer to residents of a west end apartment building which must be vacated for a major renovation. 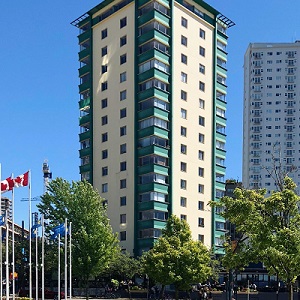 The private company announced last week (June 14) its 16-storey Berkeley at English Bay must undergo extensive structural work. All 58 apartments have to be emptied beginning in 2019. The renovations are expected to take about 30 months.

The compensation package from Reliance will provide $10,000 (on average) per unit, for a total building package of $500,000.

The work will result in all apartments being open to the elements and without heat, water and fire safety systems for a significant period.

“At the end of the day, it’s a 60-year-old building,” said Stovell, who joined Reliance in 1994. He also serves as the chair of Urban Development Institute and has advised B.C.’s new Rental Housing Task Force.

“It’s had almost no work done on it from the very beginning when it was first built and we simply can’t keep a building like that going indefinitely without doing some major work,” he said.

Government tenancy laws would require about half of Reliance’s payout per unit and about $200,000 for the entire building (compensation is based on length of tenancy and unit size).

Stovell said Reliance is exceeding the timeline for providing notice to end tenancy, providing compensation for moving costs and additional relocation assistance for those who need it. The evicted tenants will also, by law, have the right of first refusal once the building reopens.

Reliance mailed and hand-delivered notices to tenants on June 12, informing them their tenancy agreements would come to an end.

“Reliance knows this is difficult news for tenants,” he said. “We are significantly exceeding our regulatory obligations under BC’s Residential Tenancy Act and City of Vancouver’s tenant relocation policies.”

Reliance Properties owns and manages more than 500 rental units in Vancouver and has another 1,000 rental units under development. Stovell said the company has a half-dozen similar purpose-built rental buildings in the Vancouver area, including in Gastown and the West End.

“I think if we did encounter this again we would take a similar approach if not update it,” Stovell said, when asked if the entitlements package is a portfolio-wide policy. “At this time though we don’t have any other buildings that require this level of intervention.”

Last month, several changes to B.C.’s Residential Tenancy Act came into force. As part of the new regulations, and in addition to financial entitlements, landlords must now give four months’ notice to end tenancy for demolition, renovation or repair, or conversion. Tenants have 30 days to dispute the notice.

Tenants also now have a right of first refusal to enter into a new tenancy agreement, at a rent determined by the landlord, if the landlord ends their tenancy to renovate or repair the rental unit.

“Each situation is unique,” he said, noting Vancouver is a remarkably challenging place to find a home. For example, he said, Reliance’s Vancouver rental portfolio has no vacancies.

“We really want to reinforce the point that, from a corporate point of view, we are trying to do the best we can to make the most fair and generous settlement that we can justify, and that does go well beyond what the government requires, both the City of Vancouver and the province,” he said.

A B.C. advocacy group for rental housing providers lauded the package being provided to the tenants.

“So much of our existing rental stock is reaching the end of its useful life and must be repurposed,” said David Hutniak, CEO of LandlordBC, in a prepared statement. “When this happens, a positive tenant compensation package is critical.

“Reliance Properties is demonstrating leadership by setting a high standard for what is fair and respectful treatment of tenants faced with relocating.”