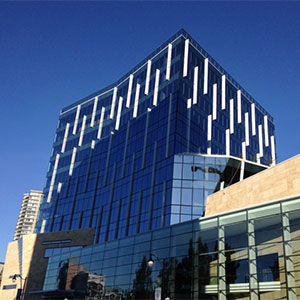 The Anvil Centre in New Westminster is now fully leased, after being vacant a year ago.

The report said vacancy in every sub-market but three dropped below 10 per cent, with two of the markets — Surrey and New Westminster — expected to fall below that mark this year due to recent lease-ups.

Only the North Shore market showed increased vacancy at the end of last year, but that number is expected to drop now that a sizable new office building has started to fill up.

Despite the overall positive leasing numbers, there appears to be only a marginal amount of new office supply coming to the suburbs within the next two years. Most of that new inventory will come in Burnaby and Surrey, and much of that product has been earmarked as strata office, meaning vacancy rates will likely continue to tighten.

Burnaby and Surrey leading the suburbs

Burnaby is experiencing the most demand of all the suburban markets right now, said Josh Sookero, a principal with Avison Young.

“Burnaby is a safe bet if you don’t have a downtown location,” he told RENX. “It’s close to the downtown core. It’s central and it’s well-established.”

Highway 1 runs right through the middle of Burnaby and the city is home to several key SkyTrain stations, he said.

Across the Fraser River, Surrey has also been performing well. “We’re seeing a lot of activity in the Surrey City Centre,” Sookero said. “And it is trickling through other nodes of Surrey.”

One outlier in terms of overall vacancy has been New Westminster.

Vacancy in that city remains at an inflated 16.6 per cent, and vacancy has been higher than 15 per cent since mid-2014, according to the report.

Most of that, however, has been due to the previously vacant 137,000-square-foot Anvil Centre. That downtown building is now nearly entirely leased by tenants including Douglas College, B.C. Land Titles, B.C. Lottery and administration firm Aerotek.

Those deals will sweep much of the excess vacancy off of New West’s inventory, Sookero said.

In the North Shore, vacancy jumped to 12.9 per cent at year-end 2017, up from 7.9 per cent a year earlier. That jump was due to the delivery of Onni Group’s CentreView development that has added nearly 79,000 square feet of office space in the form of a four-storey podium at a mixed-use residential building at Lonsdale and 13th Ave.

“We’ve added 80,000 square feet to a market that’s only 1.3 million square feet in total,” he told RENX. “So, it does have a dramatic increase on the vacancy rate.”

Whitchelo said Cowi took two floors of the new CentreView podium. “I would say the leasing activity has been strong, considering that’s a lot of space to bring to a small market like the North Shore,” he said.

Despite the positive demand numbers, there has not been much suburban office development taking shape and likely won’t be in the near future, said Brian Mackenzie, a vice-president with Colliers International.

“Nothing massive,” he said. “There’s nothing big on the horizon but everything is full that should be full.”

There is some relief coming, albeit mostly in strata, which will do little to ease pressure in the leasing market.

Relief is coming, but not much

Landview Construction is also working on the GTC Professional Building at 10189 153rd St. in Surrey. The 100,000-square-foot building is due toward the end of next year.

Other large projects are in various stages of planning, including Blackwood Partners‘ 500,000-square-foot Central City Tower 2 at King George Blvd and 100 Ave. But that proposal is in early stages with no completion date planned.

In Burnaby, Anthem Properties’ mixed-use Station Square development will include nearly 53,000 square feet of office space on two floors of the building’s podium. That Metrotown area project is due to complete in Q3 2018.

Cressey Development Group is also building 74,000 square feet of strata office at its massive Kings Crossing complex on Edmonds St. The office phase is due to complete in mid-2019.

It’s tougher in the burbs

In many cases, the development costs for office don’t make much sense, Mackenzie said. “With today’s construction costs, you’ll often need a high $30 lease rate to make it make sense and, in the suburbs, the tenants will pay high-20s.”

At transit hubs and high-density centres, most of the development has been condos, Mackenzie said.

“Developers have been doing quite well on building condos and they’re focused on that,” he said. “It’s tougher to pre-lease buildings in the suburbs and often you need a pre-lease commitment to get a building going.”