The first major office building scheduled to be completed in the next wave of commercial development in downtown Vancouver officially broke ground on Wednesday. 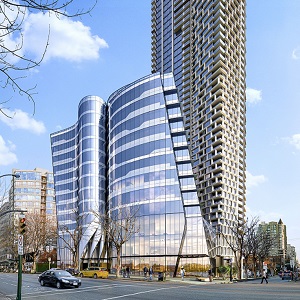 The Offices at Burrard Place, by Reliance Properties, will open in early 2020 and will be 13 storeys in height, comprising 150,000 square feet.

The groundbreaking comes at a time when Vancouver’s downtown vacancy rate of 5.2 per cent is the second-tightest in North America. Reliance went forward with the project without pre-leasing because it felt office space can’t be built quickly enough to meet demand.

“The market is remarkably strong,” said Stovell. “Tenants need to know that the building is going to be there before they’ll start to make plans to move in … We see the opportunity to execute. The last wave of office construction was very successful. Now, there’s a whole new wave coming. And this building will be the first to be delivered into the market.

“With a premier location, exceptional design and world-class amenities, The Offices at Burrard Place will give tenants a competitive advantage in finding and retaining highly sought-after professionals.”

The project is located at 1280 Burrard Street, the southern gateway to downtown. It is part of a million-square-foot Burrard Place mixed-use development, where the 60-storey One Burrard Place luxury residential tower is also currently under construction.

The project is biggest development underway in downtown Vancouver.

There are five new downtown office towers in various stages of planning and construction in Vancouver.

Commercial real estate firm Colliers International says a low vacancy rate, coupled with strong demand, has led to a spike in rent in Vancouver’s downtown office market by as much as 20 per cent in the past year and those rates are expected to continue to climb. At the end of the 2017, asking net rent in the market was $31.89.

“Large companies have an extremely limited number of options. An average tenant in the downtown core looks for approximately 5,000 to 6,000 square feet of office space, but today’s demand is driven by tenants looking for multiple floors with some needing as much as 150,000 square feet,” said Maury Dubuque, managing director of Colliers International Vancouver, the brokerage leasing The Offices at Burrard Place.

He said Vancouver has become a magnet for technology-based companies. According to the Vancouver Economic Commission, the city has about 75,000 tech workers with the industry growing by six per cent each year.

“The last building cycle was snapped up very quickly and thanks in part to these large technology companies developing footprints in the market,” said Dubuque. “And, as a result, we are effectively out of space in Vancouver.”

“I don’t think it would be too wild a statement to suggest that all of those buildings would 75 per cent to fully leased before they’re completed,” said Dubuque.

One Burrard Place under construction

Ian McKay, CEO of the Vancouver Economic Commission, said there are an increasing number of multinational corporations and homegrown start-ups choosing to expand and scale up in Vancouver. There are also thousands of tech-related seats added to post-secondary institutions across the province.

“The city’s knowledge-based economy is set to continue growing at an accelerated pace,” he said. “The Burrard Place development is the investment community’s vote of confidence in Vancouver’s future.”

One Burrard Place, when completed in the third quarter of 2020, will be Western Canada’s tallest all-residential skyscraper and the third-tallest building in Vancouver. It will have 444 units and is already sold out. There will also be about 60,000 square feet of office space and a Meinhardt Fine Foods store.

Beside the office tower will be a three-storey Toyota showroom, being built at the same time.