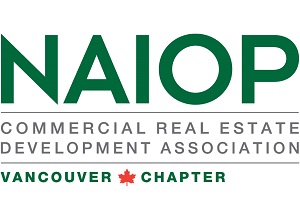 Roughly 150,000 are employed in B.C.’s tech industry, said Kraig Docherty, the director of talent programs at B.C. Tech — an advocacy organization for the region’s technology industry. He was speaking during a panel focused on the future of technology and real estate at the Commercial Real Estate Development Association (NAIOP) in downtown Vancouver.

However, about 80% of tech firms in Vancouver have fewer than 10 staff members, Docherty said.

Docherty and the other panelists said the regional tech industry is growing, but developers, governments and landlords shouldn’t take its limited success for granted.

“Vancouver is a great value play”

“We know Montreal wants to eat our lunch,” said Kevin Nelson, a senior vice-president with CBRE.

He said San Francisco has seen net migration leaving the city in four of the last eight months, and tech is part of that decline. He said congested infrastructure, traffic and extremely high housing costs in the Bay Area are toxic to the tech environment.

Vancouver, he added, faces many of the same problems without the existing critical mass of companies and talent.

An average tech worker in Vancouver earns about $60,000, Nelson said. That same worker in San Francisco earns double that.

Nelson said CBRE recently released a report comparing the costs of a hypothetical 500-employee tech operation working in a 75,000-square-foot space across various cities. “We’re (Vancouver) 46 per cent of San Francisco’s costs for the exact same operation to exist,” he said.

He said labour eats up about 93 per cent of a Vancouver tech firm’s budget, while real estate takes up the remainder. “Vancouver is a great value play in North America,” he said.

“But we need to crank up the money available for investing in local firms and growing them, and then we have to really drive the density supply side,” he said. “The universities also have to crank out more tech graduates.”

The super tenants of the world such as Google and Amazon are considering about 30 other markets in the U.S. and several others in Europe when it comes to expansion, said fellow panelist Gavin Reynolds, JLL’s executive vice-president.

Vancouver is competing for business and talent with cities like Charlotte, Columbus and Tampa, he said.

“We need to really work on marketing our city better and we need to bring more inventory to market,” he said, referring to office space. “Vancouver is just a beneficiary right now of some of the pent-up demand.”

Despite the addition of several new office towers in downtown Vancouver in the last few years, the office vacancy rate has been dropping. A report last month by JLL says the second quarter of 2017 saw Vancouver’s downtown office-space vacancy rate drop to 6.8 per cent, down from 8.3 in late 2016.

It takes too long to approve and build an office tower, said Steffan Smith, the director of leasing for GWL Realty Advisors — a real estate developer and manager of office, retail, industrial and multi-family.

He said GWL has been working on developing the Vancouver Centre II office tower at 650 Georgia Street for about 10 years.

“We’re breaking ground next month and it’s going to be a three-and-a-half year, or four-year build on that tower,” he said.

Smith said they expect about half of the tenants in the 33-storey building will be tech firms, but the challenge is to anticipate the office needs of a technology industry that may be very different three years from now.

Within 10 years, tech firms may start looking outside of the downtown core for work space, Smith said.

“At some point, these cities that are the suburbs of Metro Vancouver are going to be checking more and more boxes, and there’s going to be reasons for companies to say, ‘I don’t need to be in downtown Vancouver competing with everybody else at double the rent.’ ”

Right now, a major tech firm can’t find a 70,000-square-foot space downtown, but it could probably find one in the suburbs, he said.

Vancouver has been excelling in video games, digital effects and other film post-production, Docherty said.

But the next frontier could be virtual reality. He said there are already 150 virtual reality companies in Vancouver, but most of those companies have five staff or fewer and face the same challenges as every other firm.

More needs to be done to ease those challenges, he said. “We really collectively need to be looking at academia, capital, companies, and all of these different things that comprise our ecosystem.”