Relic Entertainment, one of Vancouver’s oldest gaming companies, is moving to a new head office in the Mount Pleasant neighbourhood which is better suited to its future growth plans. 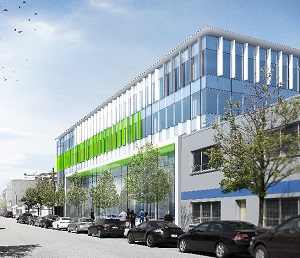 The SEGA-owned studio, with about 180 employees, will move into its new head office in the Spring or Summer of 2019 in the Nickel building at 285 West 5th – located on the former Hudson Plating site where for many years chrome-plated industrial metals were manufactured.

General manager Justin Dowdeswell says Relic is a video game development studio which has been around for about 20 years. It mostly makes PC games.

“We have a bunch of people working away on new and exciting video games,” says Dowdeswell. “When it comes to what we’re trying to build, with SEGA’s backing and the talent and tech knowledge Relic has, is to put Relic back on the map.

“As a 20-year-old studio, we’ve had our ups and downs and we’ve had a great few years and we’re still growing. But part of that ambition to be a global studio means that we need a great place to work. Where we are now (in Yaletown) is a beautiful historic building kind of space but it doesn’t really speak to us being a destination studio.”

The move into the brand new building will help the company attract and retain great talent as well as making the space they will be working in speak to its creativity and the innovation of its games.

“We didn’t want it to be ostentatious but we do want a place where when you walk in you recognize there’s an intent and it’s a deliberate effort to make the space exactly what we and our staff want to work,” says Dowdeswell.

Vancouver developer PC Urban Properties Corp., will transform what was once a low-density, heavy-industrial site into a new, 71,000-square-foot building and Relic will be leasing 47,000 square feet, or 66 per cent of the building. The rest of the space will be leased to other tenants.

Brent Sawchyn, PC Urban’s principal, says the company has been actively transforming a number of formerly heavy-industrial sites in the Mount Pleasant area into places of employment for the industries of the future.

“Re-imagining this particular site has come with serious challenges, but we believe Vancouver’s future lies in repurposing these properties, allowing them to reach their true potential and providing spaces for sustainable employment,” he says.

The four-storey Nickel structure will be a new building with light industrial use on the ground floor and mezzanine, and three storeys of office/creative space above. It will feature a contemporary design with high ceilings and views of the North Shore mountains and Downtown Vancouver.

Ground-floor units will feature double height ceilings in some areas. There are also 104 stalls for underground parking.

Fawley says the company was introduced to Relic well into the development permit process.

“Actually we were introduced to Relic about two or three weeks after we submitted for the development permit. So the ship had already sailed,” says Fawley.

“Then over the next couple of months the conversations became more detailed and it was apparent as we got the conversation going that it looked like it would be a very suitable match for them and the building that we designed was able to accommodate their business. The stars aligned which is lucky in real estate, I guess.”

The main challenge to the project was related to the contamination issue and subsequent remediation and navigating the regulatory municipal approval process.

“The outside influences on the development meant that we had to remain nimble and yet at the same time keep our process going and assist wherever possible either with the vendor or jump in and coax the city along to try and assist the development permit to meet some of the scheduled objectives we had and that we had established with Relic,” explains Fawley.

“We’re seeing a whole new class of businesses springing up in the neighborhood that are creative manufacturing companies like craft breweries, commissary kitchens, tech, visual effects and fashion,” says Jordan.

He says Vancouver rezoned a few years ago to allow for a higher proportion of a building to be used for office and opened up the kind of office uses that are now allowed.

“That’s really triggered a lot of development here over the last couple of years. The neighbourhood was always popular with certain kinds of companies like tech, software guys, visual effects companies, but now it’s opened it up even more,” says Jordan.

“So we’ve seen a lot of the older buildings trade and be sold and developers building brand new offices in the neighbourhood that are a lot better-equipped to handle these kinds of office users. The densification of office space has been a trend for several years now.”