Voisin Capital beat out four other bidders and was granted approval by Kitchener, Ont. city council on Aug. 11 to purchase 48 Ontario St. N. for $1.5 million. 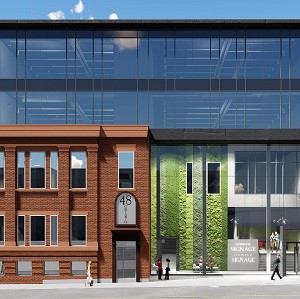 “48 Ontario is almost immediately behind one of my other buildings, 8 Queen, and for the last three years I’ve been walking by it admiring its architecture and location and wanting to do with it what I had done with 8 Queen — namely, restoring it, intensifying it and drawing a great tenant that will contribute to the vibrancy of the downtown core,” said Voisin Capital president Frank Voisin.

“The architecture is unique, with heritage features that are difficult and expensive to reproduce but are highly desirable by certain tenants.”

The two-storey, 14,000-square-foot red brick building between King and Duke streets in downtown Kitchener was built in 1910 by the Bell Telephone Co., which occupied it until 1941. It later became a Royal Canadian Legion branch and hosted blues music concerts. The City of Kitchener bought 48 Ontario in July 2001 for $425,000, when it was assembling several properties on that block, and it has sat empty ever since.

“Downtown Kitchener has changed dramatically during the city’s ownership, and I believe the decision to sell now was made as part of a larger decision to divest non-core assets that could be put to better use elsewhere,” said Voisin.

Fifty per cent of the proceeds from the sale will be used to support the local arts community while the remainder will be earmarked for other “Make it Kitchener” economic development initiatives, according to Voisin.

The existing heating, ventilation, plumbing and electrical systems must all be replaced at 48 Ontario.

Voisin Capital’s other redevelopment plans include restoring key heritage attributes, with particular emphasis on the front façade and the building’s lobby and grand staircase. The developer will also build a modern, light-filled addition in the location of the existing 16-stall parking lot and add two additional storeys to the building.

A two-storey glass lobby featuring a green living wall will provide access to ground-floor retail and a new elevator serving the upper floors. The building will ultimately house 46,000 square feet of class-A office space and 2,000 square feet of retail. Voisin Capital can add additional floors to increase density if needed.

SRM Architects Inc. is the architect and Collaborative Structures Limited is the general contractor.

The total development budget is in the $12-million range, according to Voisin. He expects to have building permits by the fourth quarter of 2018, with construction to begin in early 2019 and occupancy to take place later that year.

“I believe it will be a highly coveted site for a large user looking to expand or relocate in downtown Kitchener, and to do so with great street presence,” said Voisin, adding the company will soon start working with potential tenants who might be in the market for such a space.

The 0.25-acre site is easily accessible by public transit and a municipal parking garage is across the street. It’s within easy walking distance of restaurants and nightlife, as well as Centre in the Square, the main Kitchener Public Library branch, Kitchener Market, THEMUSEUM, Kitchener City Hall and an Ontario Court of Justice.

“48 Ontario is in the middle of the highest concentration of office space and the most amenity-rich area of Waterloo Region,” said Voisin.

* retaining designated heritage features;
* the development vision for the property;
* the quality of the design and architecture of the proposal;
* the bidder’s demonstrated ability to carry out such projects;
* and the timing of the work and proposed occupancy.

“We were the only group to take advantage of the City’s second open house for the site, and we toured with architects, consultants and trades to ensure that we had the best information and the most accurate pricing for our planned upgrades,” said Voisin. “I don’t think this additional effort was lost on the City.”

Voisin Capital previously restored 8 Queen St. N. and 45 King St. W. in downtown Kitchener, and both are fully leased. The company is also involved in the redevelopment of Catalyst137, which will be the world’s largest hardware technology hub when it opens in downtown Kitchener this fall.

Voisin Capital was formed in 2010 and has been involved with managing the redevelopment of more than 600,000 square feet of space in southwestern Ontario, including projects in Brantford, Goderich, Guelph, Hanover, London, Port Elgin, Strathroy, Wallaceburg and Woodstock.

“We look for stately urban properties that have long histories in their communities but for whatever reason are vacant or underutilized, where there is an opportunity to restore and transform them into desirable places for top employers to attract and retain talent,” said Voisin.

“We have a track record in these properties as well as in partnering with others.”