The Waterloo Region is experiencing an unprecedented building boom which could result in $1.2 billion worth of building permits issued this year, according to Karl Innanen, Colliers Canada’s managing director for the region. 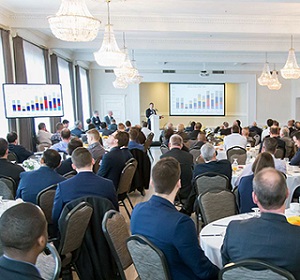 “It’s a very diverse economy that’s growing quickly. A lot of that is owing to a low cost of living relative to the Greater Toronto Area (GTA). Layered on top of that, technology companies are getting huge headlines and insurance companies Manulife and Sun Life and several smaller ones continue to grow and create employment,” Innanen told RENX.

“Manufacturers like Toyota have done very well here and there are good manufacturing jobs.

“The light rail transit line has created a lot of impetus for developers who are used to developing high-rise and high-density buildings in other parts of the country to come here because they have the skill set for it.

“The post-secondary schools — Conestoga College, Wilfrid Laurier, University of Waterloo and even the University of Guelph to some extent — have really helped promote the area and helped create great talent. Employers are moving here to capitalize on that talent.

“The GTA is just so hot and so competitive that developers are coming out here to get opportunities that make a little more sense economically. When the GTA gets hot, it usually bubbles over and comes out here.”

Perhaps the most pressing reason for developers to get their applications in is that Kitchener, Waterloo and Cambridge will reinstate development charges in their downtown cores next February. The municipalities have temporarily removed the charges to spur new construction.

Innanen said these charges work out to about $13 per square foot for office buildings, which translates to a $1.3-million savings for a 100,000-square-foot structure. Apartment and condominium developers can save about $15,000 per residential unit without the development charges.

A condo called One Hundred, with 276 suites in two towers rising from a three-storey podium, is being built by Momentum Developments and Zehr Group at 100 Victoria St.

Zehr Group’s Sixo Midtown will be the largest high-rise community in the region, composed of three condo towers with more than 800 suites, more than 200,000 square feet of office space, and almost 70,000 square feet of retail and commercial space. It will be on the edge of Kitchener’s “Innovation District” and adjacent to a forthcoming transit hub.

Construction is expected to begin within a year on Drewlo Holdings’ $80-million development in the east end of downtown Kitchener which will have 473 one- and two-bedroom units in a building with a five-storey podium and two towers.

Good and bad of the office market

“That’s drawing out the people who can afford and want to move to those sorts of buildings,” said Innanen, who noted companies are reducing their square footage by creating collaborative spaces and removing walls to fit higher lease rates into their budgets.

At the other end of the spectrum, older downtown Kitchener towers in the former office core, near King Street east of Ontario Street, are seeing vacancy rates rise.

The availability rate for the approximately 60 million square feet of industrial space in the region dropped to 3.1 per cent last year and continues to fall. Available municipal land in Cambridge is limited to 11 sites and prices have risen to $315,000 per acre. Kitchener has even fewer sites and Waterloo has none.

Industrial users want newer buildings with affordable pricing and won’t continue to occupy space that doesn’t serve their needs. They’ll renew leases for the short term and negotiate cancellation clauses in anticipation of better options coming to market. The lack of supply will drive prices up, and that in turn will help increase lease rates when new buildings are constructed.

While Innanen said some developers are sitting on land, they’re hesitant to build speculatively. He added that one developer was prepared to build 100,000 square feet on spec, but sold the land after a user offered to pay a premium.

Retail market in state of flux

“The retail market in Kitchener-Waterloo is the same as the retail market in the rest of North America,” said Innanen. “It’s in a state of flux. Everyone is taking a wait-and-see approach as to how bricks-and-mortar retail responds to Amazon (AMZN-Q) and other Internet retailers.”

Waterloo’s Conestoga Mall lost its Target store in 2015 and reconfigured the space to accommodate 11 smaller stores which opened on March 15. Cambridge Centre more recently lost its Sears Canada store and is trying to attract a community centre with a hockey rink and swimming pool to its former location.

“What we’re seeing from a lot of the retail landlords is that they’re trying to figure out how to revamp, repurpose and reposition the square footage that they’ve got,” said Innanen.