Waterloo next step in Regus expansion

Global workspace provider Regus’ explosive Canadian growth continued this week with the opening of what it believes is a groundbreaking technology-driven centre in Waterloo, Ont. 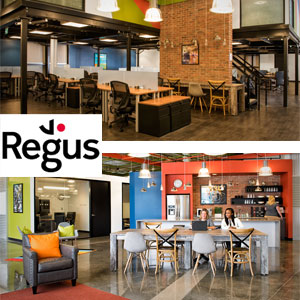 “We look at Waterloo as both a great short-term and long-term investment,” said Regus Canada vice-president Wayne Berger.

“There are 1,000 tech companies that drive $30 billion in annualized revenue out of Waterloo. It’s a great combination of both global players like Google and Microsoft and a great array of successful startups.”

Regus provides flexible workspaces at some 3,000 locations in 120 countries, and an educated workforce is a prime attraction in determining where the Luxembourg-based company decides to set up shop. Wilfrid Laurier University and the University of Waterloo are both in the southwestern Ontario city, and Regus’ newest space opened near U of W at 180 Northfield Dr.

Berger called the 21,000-square-foot Waterloo facility the “most unique” of Regus’ 92 Canadian locations, with a mezzanine that supports collaboration, multiple co-working spaces that provide room for companies to network and brainstorm in an open environment, and a roll-up garage door leading to an outdoor patio and barbecue.

“It has an urban, industrial, rustic design with great colours, polished concrete and industrial design furniture. As you walk in, you can really feel the vibe of creativity and innovation throughout the space.”

The publicly traded Regus has 92 centres across Canada, from Victoria to Halifax, and will celebrate its 15th year in the country this summer with the opening of its 100th location. It was at 55 just 18 months ago, so its expansion has been dramatic.

Regus made its early Canadian inroads in high-end buildings in the downtown cores of major cities, and its signature locations like Brookfield Place in Toronto, Bankers Hall in Calgary and Park Place in Vancouver still play critical roles in its business and meet the needs of certain clients.

The company has 46 flex-spaces in the Greater Toronto Area and is in such other major Canadian markets as Edmonton, Ottawa, Montreal and Quebec City.

Regus, however, is also making its presence felt in satellite communities such as: Richmond Hill, Markham and Oakville in Ontario; South Surrey, New Westminster, Port Moody, Maple Ridge and Burnaby in British Columbia; and Dartmouth in Nova Scotia.

“We’re seeing a lot of growth in suburban markets and some very important secondary markets because the demand is starting to pick up the pace,” said Berger. “We want to continue to expand our reach where we can.”

Regus’ appeal resides in its ability to provide: professional office space with reception, administrative and tech support; short- and longer-term leases; expansion or reduction of space on short notice; collaborative opportunities; access to the company’s global network of locations; and cost savings to startups, entrepreneurs and large organizations.

“It gives companies an opportunity to reduce their capital expenditures for real estate, sometimes up to 85 per cent,” said Berger. “It’s a major opportunity to divest a big capital cost that’s fixed through leases or owning buildings.”

Today’s emphasis on sustainability, mobility and work-life balance also plays into the hands of Regus, which can provide workspaces in a variety of styles and locations, including malls, retail outlets, railway stations, universities, motorway service stations and community centres.

“This type of flexible working model gives companies an opportunity to maintain their headquarters if they want, but they can also place people in surrounding areas that are still highly productive and highly professional to get the job done at a fraction of the cost,” said Berger.

“The quality of work life improves dramatically, which means greater retention for your team members, greater engagement and a more productive workforce.”

The ailing loonie presents an intriguing opportunity for American investors thinking of tapping into the market now that their greenbacks stretch 30 per cent further than two years ago.

“All of that helps the model for flexible workspace because a company can come in and start to build their business in a flexible arrangement until they move to conventional real estate or until they see if the market is amenable to them,” said Berger.

Other companies — including iQ Office Suites, Instant Offices, Intelligent Office, Acme Works and Telsec Business Centres — also saw the potential and profitability in providing flexible, temporary office space and have secured their pieces of the pie.

“From a global and national perspective, there aren’t a large number of competitors that have the same level of scale, but we are seeing more niche competitors come into the market to offer different types of co-working environments,” said Berger.

Berger said Regus, which was founded in Brussels, Belgium in 1989 and was a pioneer in the field, welcomes the competition.

“Competitors always ensure that we stay focused on innovating, and the more competitors we have the more opportunity there is to ensure that the message gets out and the more people have a chance to taste the environment and what it’s like to work from a flexible workspace.”