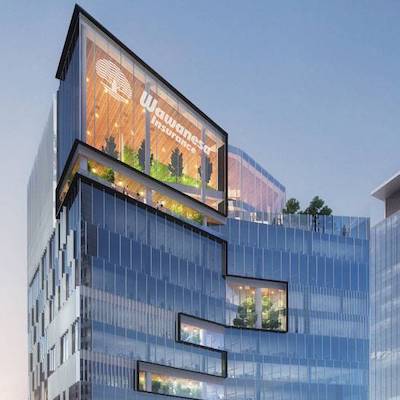 Winnipeg’s downtown True North Square development will soon have its fifth and final office tower under construction. Manitoba-based Wawanesa Mutual Insurance Company will move its headquarters into a new, 19-storey building at the mixed-use property, the company announced Thursday.

The company will consolidate 1,100 of its Winnipeg workers at the new building, which will contain about 300,000 square feet of space and be leased solely to Wawanesa by True North Real Estate Development. TNRED is a subsidiary of True North Sports and Entertainment, which also owns the Winnipeg Jets NHL hockey team and its downtown arena, Bell MTS Place.

“Today’s announcement is the latest example of the ongoing architectural makeover happening at True North Square in downtown Winnipeg,” said Jim Ludlow, president of TNRED, in announcing the new tower. “Over the past 16 years, True North Sports and Entertainment, along with our partners, have invested almost one billion dollars into new developments in downtown Winnipeg including 225 Carlton, 242 Hargrave, Sutton Place Hotel & Residences, and the catalyst for all of this growth, Bell MTS Place.”

True North spokeswoman Krista Sinaisky told RENX costs for the new office tower are expected to be $125 to $150 million.

Wawanesa’s state-of-the-art, purpose-built headquarters will be located at the southwest corner of Carlton Street and Graham Avenue in downtown Winnipeg. That’s next to the Sutton Place Hotel & Residences, adjacent to the Royal Winnipeg Ballet (RWB), and directly across from the recently opened public plaza at True North Square.

“As a diversified North American insurance company and Canada’s largest mutual insurer, we’re proud to write the next chapter of our commitment to Manitoba, where our company was founded, by investing in Winnipeg’s evolving downtown core,” said Evan Johnston, senior vice-president, chief legal and strategy officer for Wawanesa Insurance, in the announcement.

Wawanesa was founded in 1896. It is the largest Canadian property and casualty mutual insurer with $3 billion in annual revenue and assets of more than $9 billion.

During the past five years, Wawanesa’s Winnipeg-based workforce has virtually doubled in size, as the company has moved to modernize facilities and its business in an increasingly globalized insurance industry. Wawanesa employs a total of about 5,000 people.

Equipped with an extensive suite of amenities, the new building will include soaring lobby spaces infused with natural light, as well as townhall spaces with direct views into True North Square.

Designed by Canada’s Architecture49 (A49) the tower is focused on sustainability and employee well-being.

As part of True North Square, the building will be connected to Winnipeg’s downtown skywalk system, in close proximity to Bell MTS Place, Cityplace, the RWB, and the RBC Convention Centre, the Graham Avenue transit mall, and bicycle corridors.

“Our vision of creating a new neighbourhood, spurring growth, building world-class spaces, and increasing density and safety continues to come to life with the addition of the fifth True North Square tower,” Ludlow said in the statement.

“When completed, Wawanesa’s new headquarters will be a highly visible, innovative office building within the now 1.5 million-square-foot campus at True North Square.”

The building is scheduled for delivery in 2023.

Designed by A49 and to be built by PCL Construction, it will be the last remaining office development at True North.

In order to build the tower, existing structures at the site will be demolished, including the Royal Winnipeg Ballet School student dormitory and the adjacent building at 372 Graham Ave. The development means the RWB will move into a new state-of-the-art dormitory to be built in close proximity to its current school.

Those plans will be confirmed in the coming months.

“Canada’s Royal Winnipeg Ballet is thrilled to be collaborating with True North to conduct a review of its options to build a new student dormitory for the RWB School,” said André Lewis, RWB’s CEO and artistic director in the announcement.

“We believe that a new state-of-the-art student housing solution will ensure that the RWB School continues to rank among the best ballet schools in the world.”

Elsewhere at the site, the 17-storey, class-A 242 Hargrave office tower opened in July 2018 and is home to lead tenants Thompson Dorfman Sweatman and Scotiabank. Both MNP and Ceridian are to move in during the fall of 2019.

Ceridian is the most recent addition to that building, having leased the 28,000-square-foot third floor for about 200 employees in January. The Hargrave St. Market food hall is also set to open this fall.

242 Hargrave is the first office tower developed in Winnipeg since 1990.

True North Square’s public plaza, complete with a fountain, patios and public event spaces, opened in the fall of 2018.

Phase 2 of the development is now under construction and includes the Sutton Place Hotel & Residences on Carlton Street. These buildings are set for completion in late 2021/early 2022.