The mixed-use Westbury Montreal development represents “the first domino to fall” in an area of Montreal with strong development potential, says the developer behind the project. 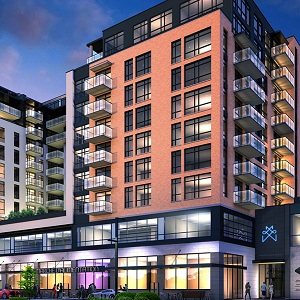 Devmont’s Westbury Montreal development is one of several projects which will transform a midtown section of Decarie Blvd.

“This neighbourhood is undergoing real change,” says Lefort, who spoke at the Montreal Board of Trade’s recent Strategic Forum on Major Real Estate Projects.

Devmont has built about 1,000 condo units since 2008 in the Rouge Condos and Côté-Ouest developments nearby, in the emerging Le Triangle neighbourhood of Montreal which was once industrial.

Overall, the buildings will have more than 1.1 million square feet of space.

Devmont has inked a deal with a major hotel chain which it prefers not to name, Lefort says. The hotel and office building will be located on Décarie.

One of the area’s major developments includes the proposed Royalmount shopping mall in Town of Mount Royal at the junction of highways 15 and 40. The planned $1.7-billion megaproject by Carbonleo, which would be built on former industrial site, would also include hotels, office space, movie theatres and a concert hall.

Another major project includes an eventual housing development at the site of the former Hippodrome Blue Bonnets.

The Westbury Montreal project will create a transition between the commercial sector of Décarie and the nearby residential neighbourhood, Lefort says.

It will be built at the site of the former Armstrong Industries factory between Décarie and Westbury Avenue, which is currently being demolished.

Construction is slated to begin in the fall, with the first building to be completed in 2019 and the entire project scheduled for completion in 2022.

Lefort notes the proximity of railway tracks to the development poses challenges, but that a rarity of large plots of land is forcing developers to make use of sites that would not have previously been considered attractive.

Several studies on sound and vibrations have been conducted and “everything has been done to minimize (noise) challenges.” Quality construction should eliminate noise from the trains, he says. A pedestrian overpass will also be built over the rail tracks.

The site is considered to be in a TOD (Transit Oriented Development) neighbourhood with two Métro stations nearby.

Westbury Montreal will also include 60,000 square feet of retail space with stores that will enable residents to live a car-free lifestyle, Lefort says. Planned stores include a supermarket, pharmacy, restaurants, cafes, daycare and dental and medical clinics.

Innovative rain management is planned for the site, with the first five millimetres of rainwater to be retained for use in the project’s green spaces.

Part of the residential project will include affordable and social housing.

Condos will range from 550 to 1,500 square feet. As part of the marketing for Primma Condominiums, visits to the site are being offered by limousine.